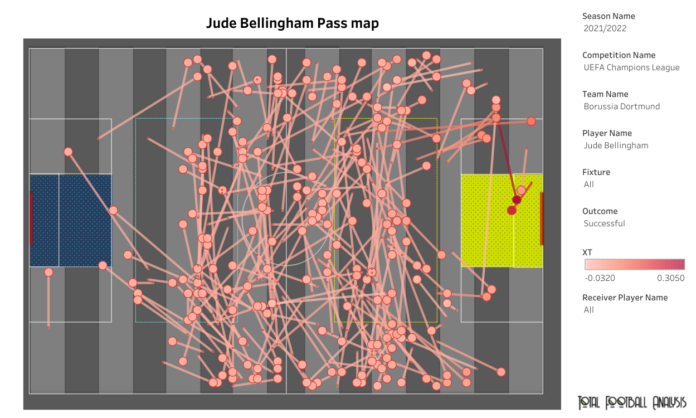 Due to the business model and recruitment strategy used by Bundesliga side Borussia Dortmund, the club seems to spend every summer at the heart of an epic transfer tussle.

This summer, it was the prolific Erling Haaland who took his opportunity to leave the club, eventually opting to join Manchester City for an initial £51 million amid interest from across the whole of Europe.

In the next summer window, it’s the precocious midfielder Jude Bellingham who’s likely to join one of Europe’s elite clubs. But are Los Blancos in pole position, and would his acquisition complete the club’s ongoing midfield transition?

What do we Know so Far?

Bellingham, still just 19, has come on leaps and bounds in the last 18 month, after initially joining Dortmund for an initial £25 million (a record for a 17-year-old) from Birmingham City in 2020.

He has since scored 18 goals in 108 appearances for the German club (including eight in the Champions League), becoming an increasingly influential player while also winning 17 senior caps for England.

As the clamour for his services grows, Bellingham has been increasingly linked with a return to England, with Liverpool, Manchester United and Manchester City all known to be keen admirers.

However, Real Madrid have recently emerged as the favourites to secure his signature ahead of the 2023/24 season, with Huge Stakes currently offering odds on this deal being completed. Click through here if you’re wondering “where can i sign up for a stake promo code”?

Is This Deal Likely and What Would it Mean for Madrid?

While Bellingham is far from happy at Dortmund, his rapid progression and the club’s underlying business model mean that he’s likely to be sold for a marked profit next summer.

Madrid are also one of the few clubs who could afford the dynamic Englishman and reward him with a competitive salary package, while the lure of the club is known far and wide across the globe.

The club have even created space in the squad for Bellingham among their selection of non-EU registered players, with Vinicius Junior, Rodrygo and Eder Militao having all recently earned Spanish citizenship.

But what would the move mean for Madrid? Well, apart from reinforcing Los Blancos’ status as the world’s biggest and most attractive club, it would also help manager Carlo Ancelotti to complete the transition of his midfield.

Both of these players are now regular starters, and the acquisition of Bellingham would create a next-generation midfield that would be the envy of most clubs across the globe.

Certainly, the dynamic combination of Camavinga and Bellingham has immense potential, especially if they’re deployed in front of Tchouaméni and afforded the freedom to influence play in the attacking third.

With Modric and Toni Kross also remaining key components in the Madrid midfield for now, the summer signing of Bellingham would enable him to gradually acclimatise to his new surroundings and effectively integrate himself into the first team.

Under the microscope: Real Madrid in ‘Kroos’ control this season