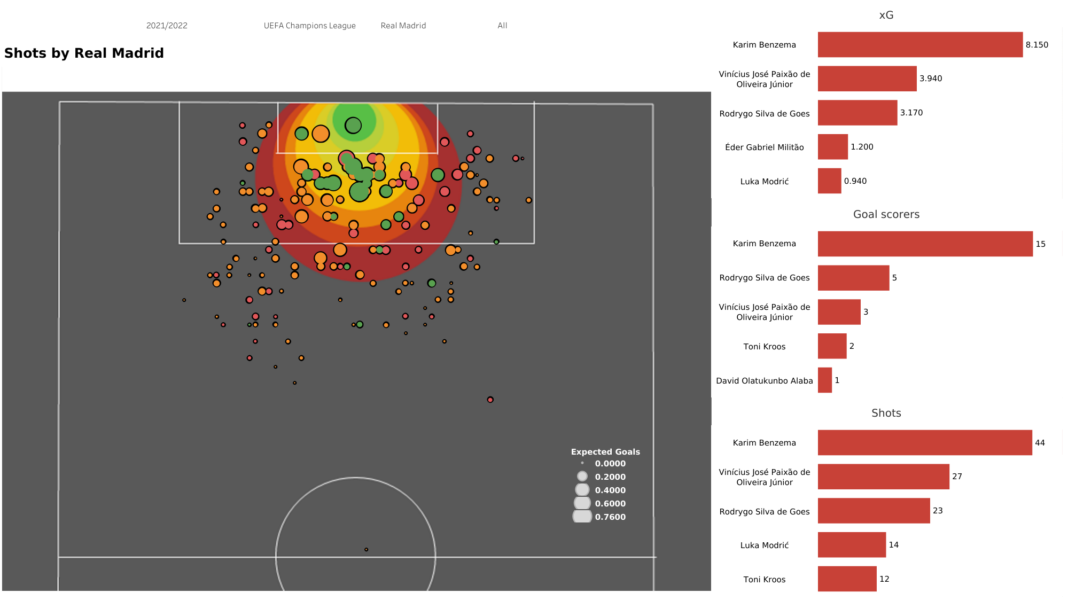 On Saturday, May 28th 2022, Liverpool will face Real Madrid in the UEFA Champions League final, which will be the biggest club match of the season. The 67th European Cup/Champions League final will take place at the Stade de France in Paris, which will host its first UCL final since 2006. In the semi-finals, Liverpool and Real Madrid defeated Villarreal and Manchester City, respectively, to reach the final. Liverpool are in their 10th European Cup final, whereas Real Madrid are in their 17th final. 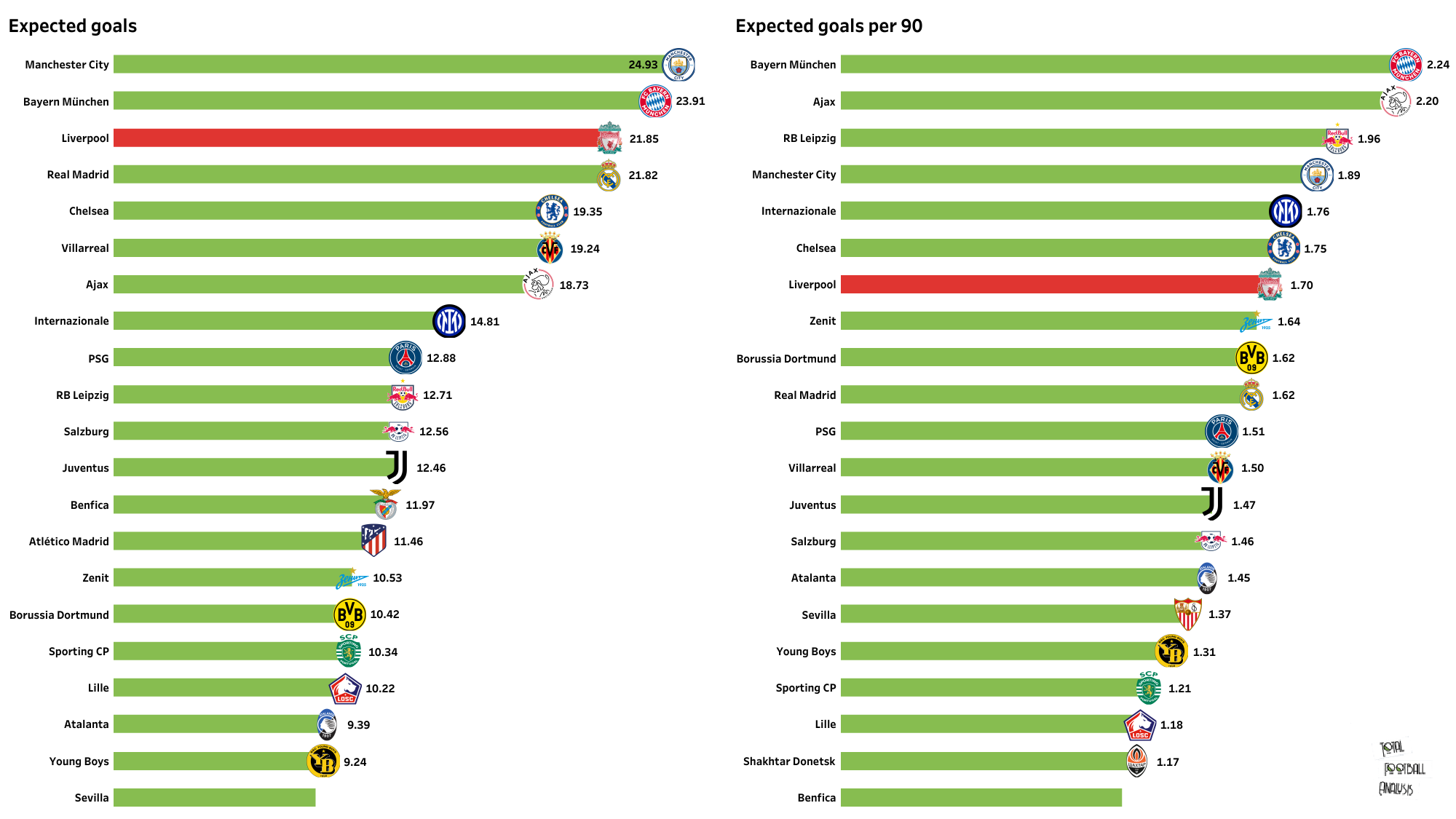 Liverpool are coming off a 3-1 win over Wolves on the last day of the Premier League season. This victory, however, was unable to prevent Manchester City from capturing their second straight Premier League title. The Reds overcame Villarreal 5-2 on aggregate in the semi-finals, winning 2-0 at Anfield and 3-2 away at El Madrigal. Liverpool had an xG of 22 this season in the UEFA Champions League. However, they have surpassed this number by scoring 30 goals on their way to the final. 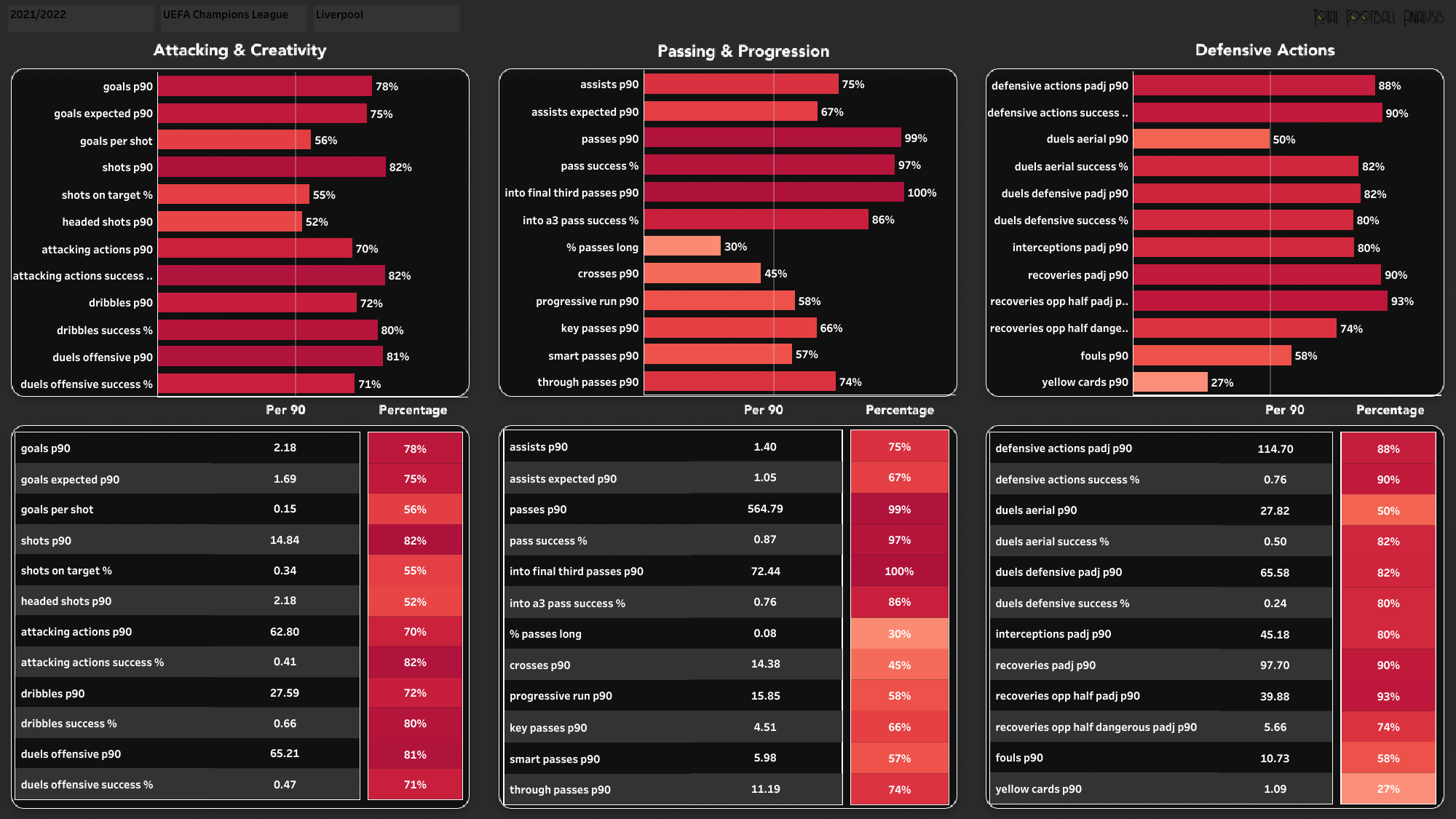 Liverpool have surpassed their xA per 90 of 1.05 by giving 1.4 assists per 90, just as they have outperformed their xG per 90. The Reds’ passing accuracy is 87 percent, which puts them in the top 3% in the UEFA Champions League for this category. Liverpool has also attempted 72 passes into the final third of the field each game, with a 76% accuracy. In this UEFA Champions League season, the Reds have also been effective in 76% of their defensive operations. Liverpool have won 50% of their aerial duels. They have also made 45 interceptions and 98 recoveries per game. 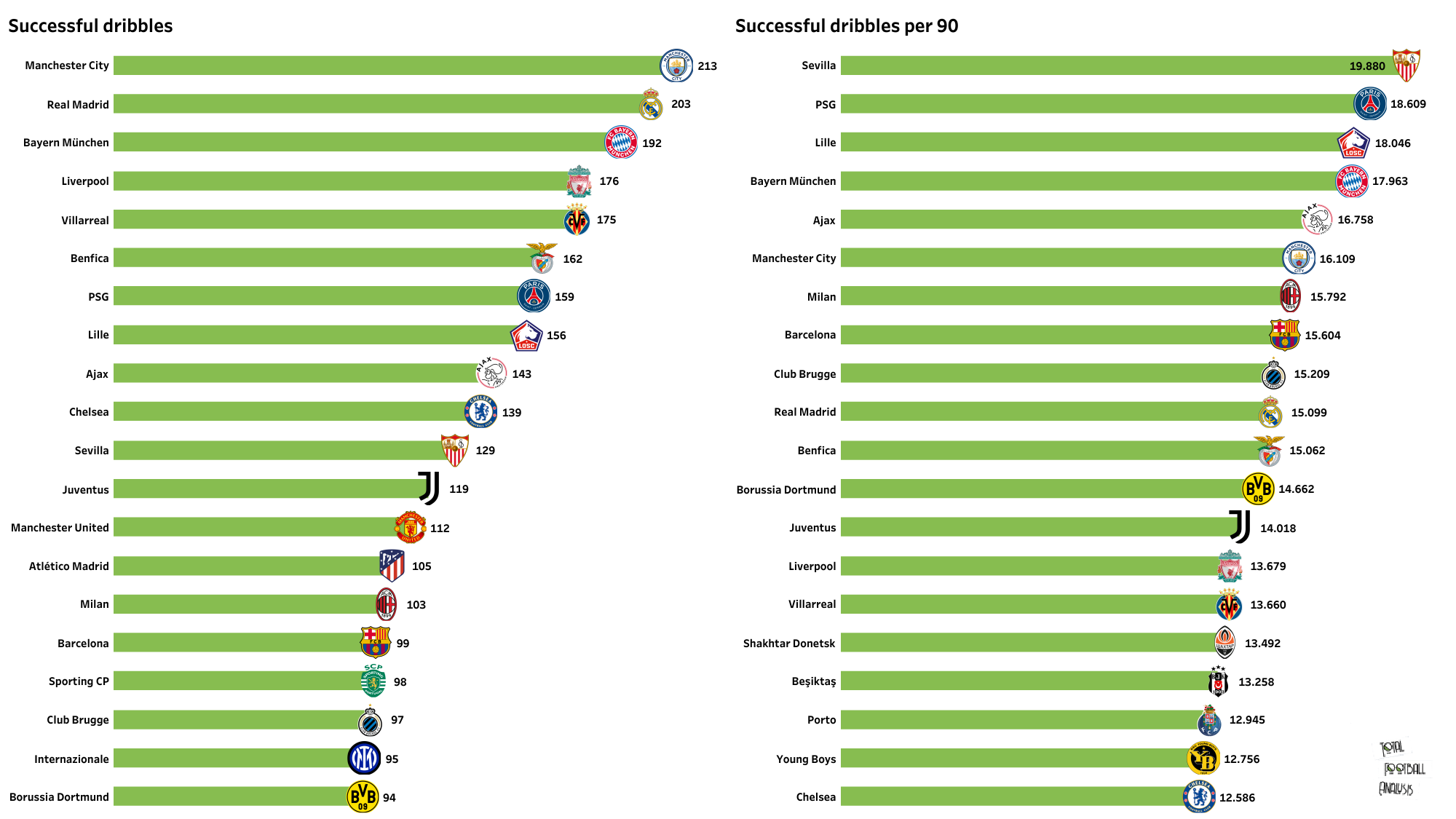 Real Madrid are coming off a goalless draw with Real Betis in their last LaLiga encounter of the season. With 26 victories, eight draws, and four loses, Los Blancos were crowned champions. Real Madrid defeated Manchester City 6-5 on aggregate in the UEFA Champions League semi-finals, having lost 3-4 in the first leg at the Etihad Stadium before prevailing 3-1 in extra time at the Santiago Bernabeu. With 203 successful dribbles in this UCL season, Real Madrid are the second-most successful team, behind only Man City. 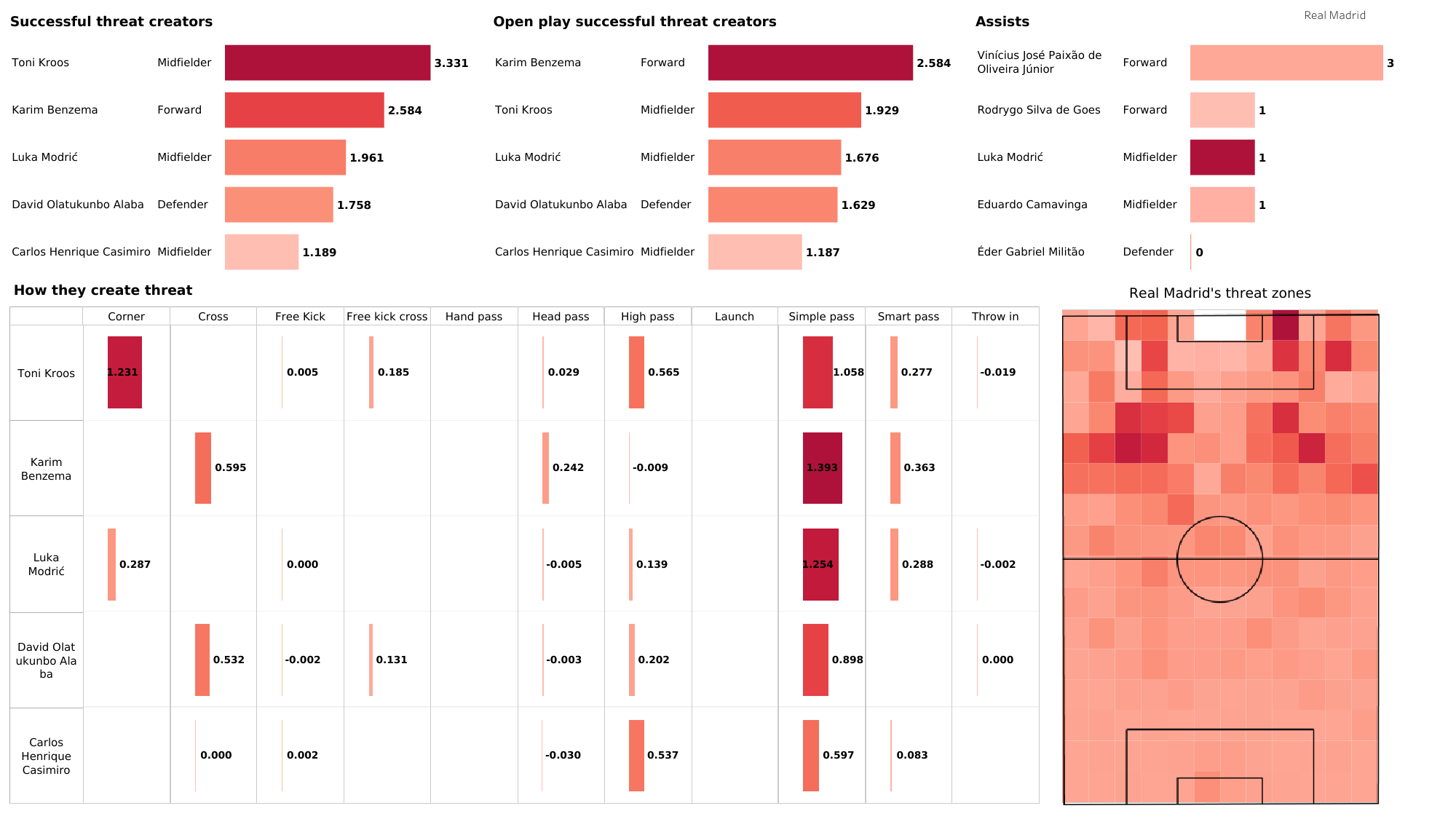 In this UEFA Champions League season, Toni Kroos has been Real Madrid’s most successful threat generator. The majority of this, however, has come from set-pieces. Karim Benzema has been the most dangerous player in open play. With six assists, Vinicius Junior leads the assists tally for Los Blancos in this UCL season, followed by Luka Modric and Ferland Mendy in second and third places, respectively. 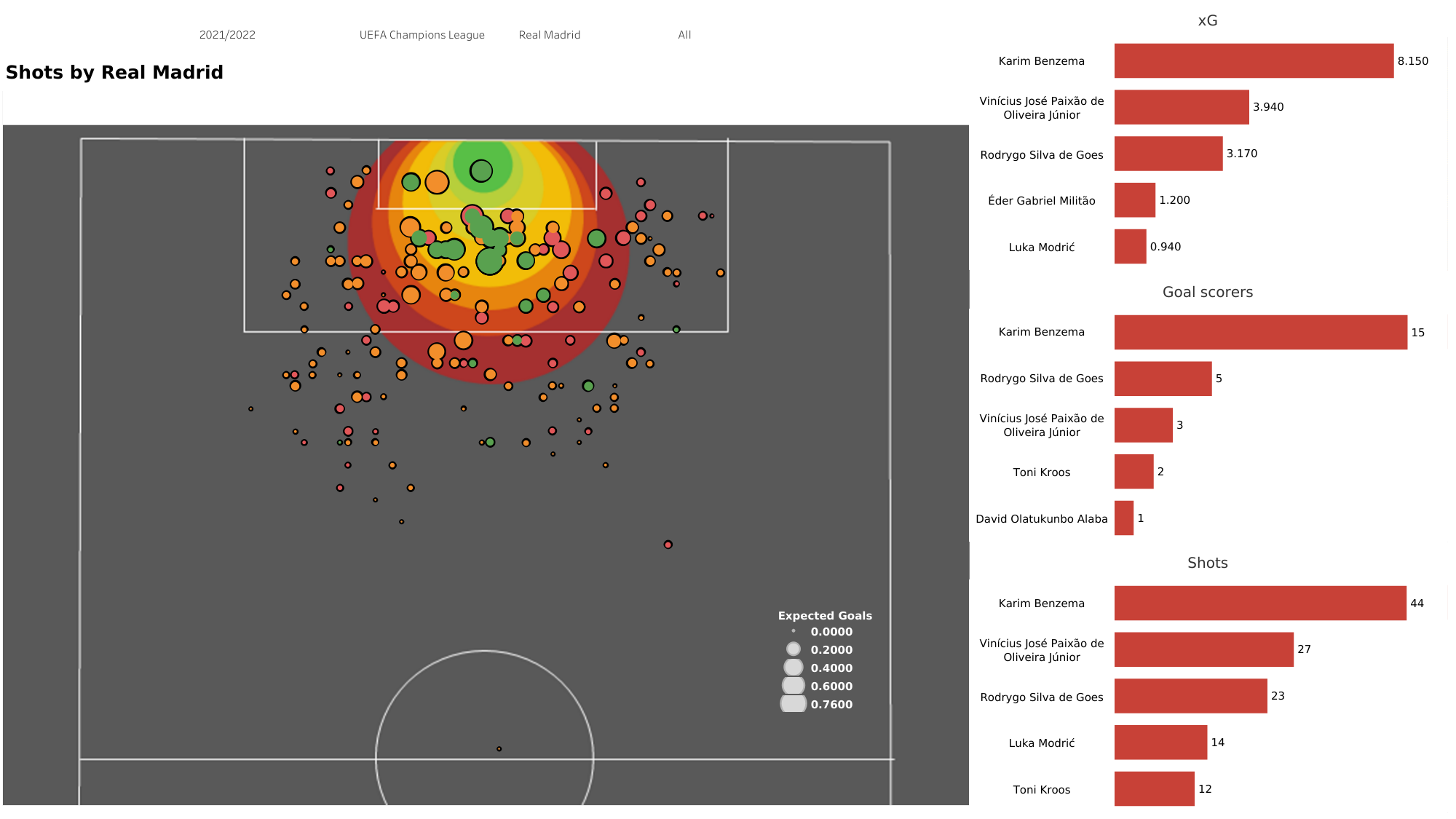 Shown in the above visual is Real Madrid’s shot map for this UEFA Champions League season. Karim Benzema has 15 goals to his name, three of which have been penalties. Rodrygo Goes is in second place with five goals in only four starts. Real Madrid have tried 175 shots and scored 27 goals, with a conversion rate of 6.48 shots per goal scored.

Real Madrid will be aiming to win their 14th European Cup/UEFA Champions League title in what is a rematch of the 2018 final. While that match is remembered for Loris Karius’ goalkeeping errors, Los Blancos are facing a much improved Liverpool team since that night in Kiev. Moreover, the last time Real Madrid lost a European Cup final, it was against Liverpool way back in 1981. According to bookmakers, Real Madrid are apparently the ‘underdogs’ for this match but as this season has shown, they cannot be written off, having made comeback wins against PSG, Chelsea (on aggregate) and Manchester City to reach the showpiece event.