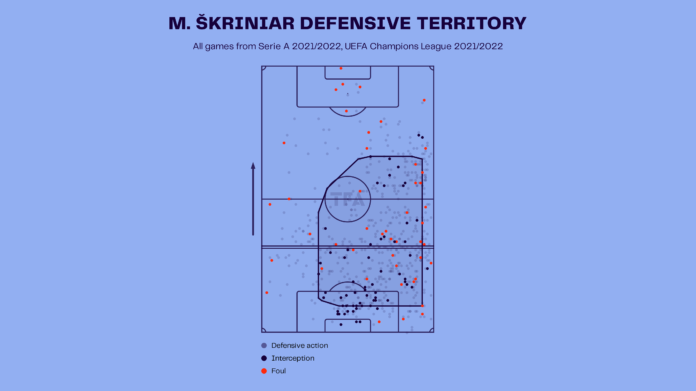 Real Madrid are the only team in the top-five leagues to start the season with a 100% record. The defending LaLiga champions have won their first six games of the season and are looking to secure their 36th league title. The Los Blancos had a decent transfer window in which they purchased Aurelien Tchouameni and Antonio Rudiger. Real Madrid have done a lot of transfer business after the World Cup in the previous seasons. This time they decided to stick with the players they had and only signed a few to strengthen their squad.

Los Blancos are now planning to secure some signings for the next season. The player who has recently emerged as their target is Inter Milan’s Slovakian centre-back, Milan Skriniar. The 27-year-old will be out of contract next summer. He was close to a move to French champions PSG, but the deal didn’t go through. Skriniar is rated as one of the best centre-backs in Serie A. We now look at some of the stats that show why Real Madrid have shown an interest in the 27-year-old. 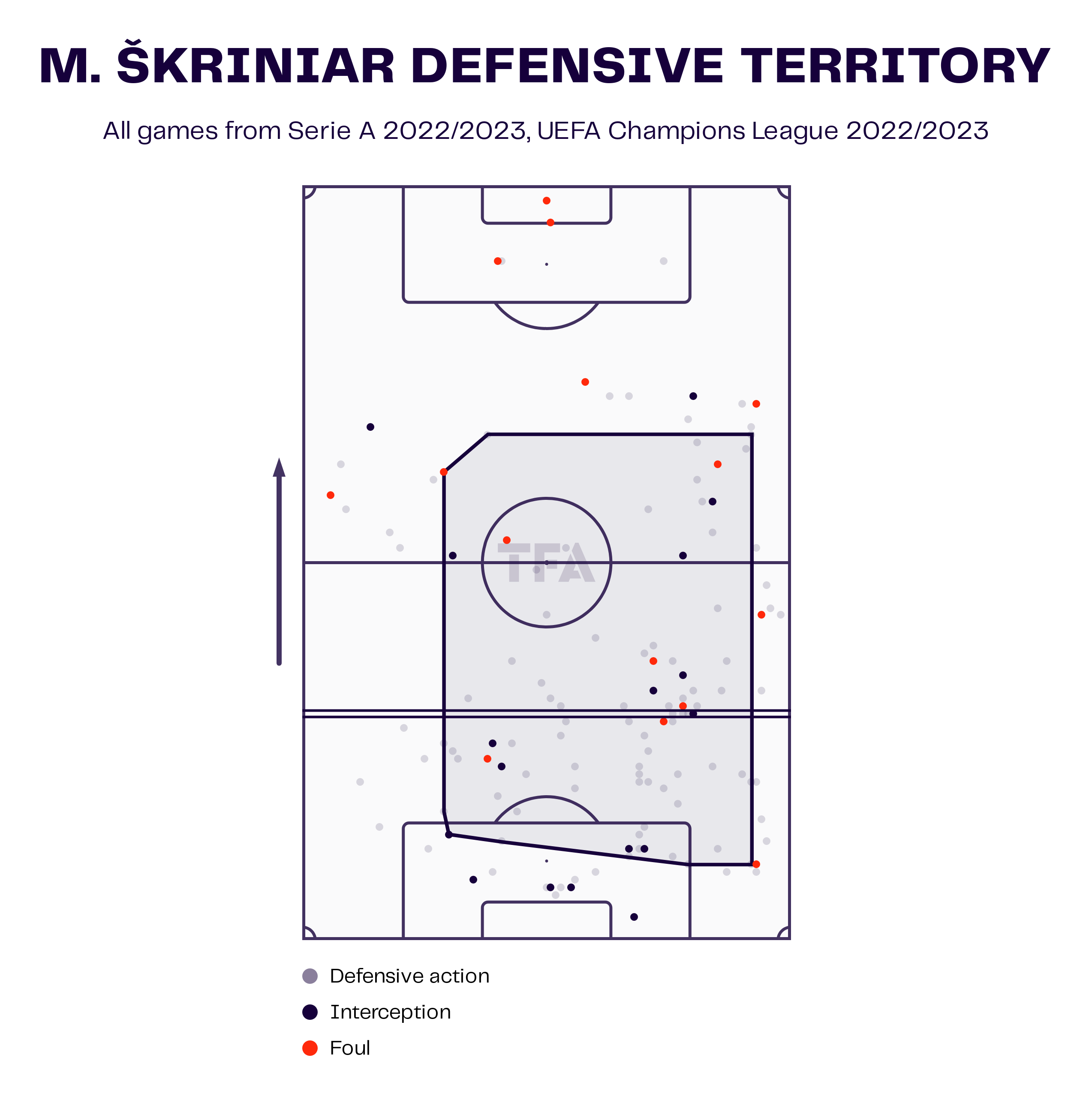 Milan Skriniar plays on the right side of the defensive three. He has played nine games for Inter this season, and seven of them came in Serie A. After finishing in the top two in the last two seasons, the Nerazzurri haven’t started the current season as they wished for. They have already lost three games and are five points behind the league leaders. This has also affected the form of Milan Skriniar. The above viz shows the defensive territory of the player in Serie A and the UEFA Champions League. He averages 10.3 duels per 90 minutes and has a 50% success rate. Skriniar has committed 15 fouls but hasn’t received a booking. Other than this, he averages 4.2 interceptions per 90 minutes and six came inside the penalty box. 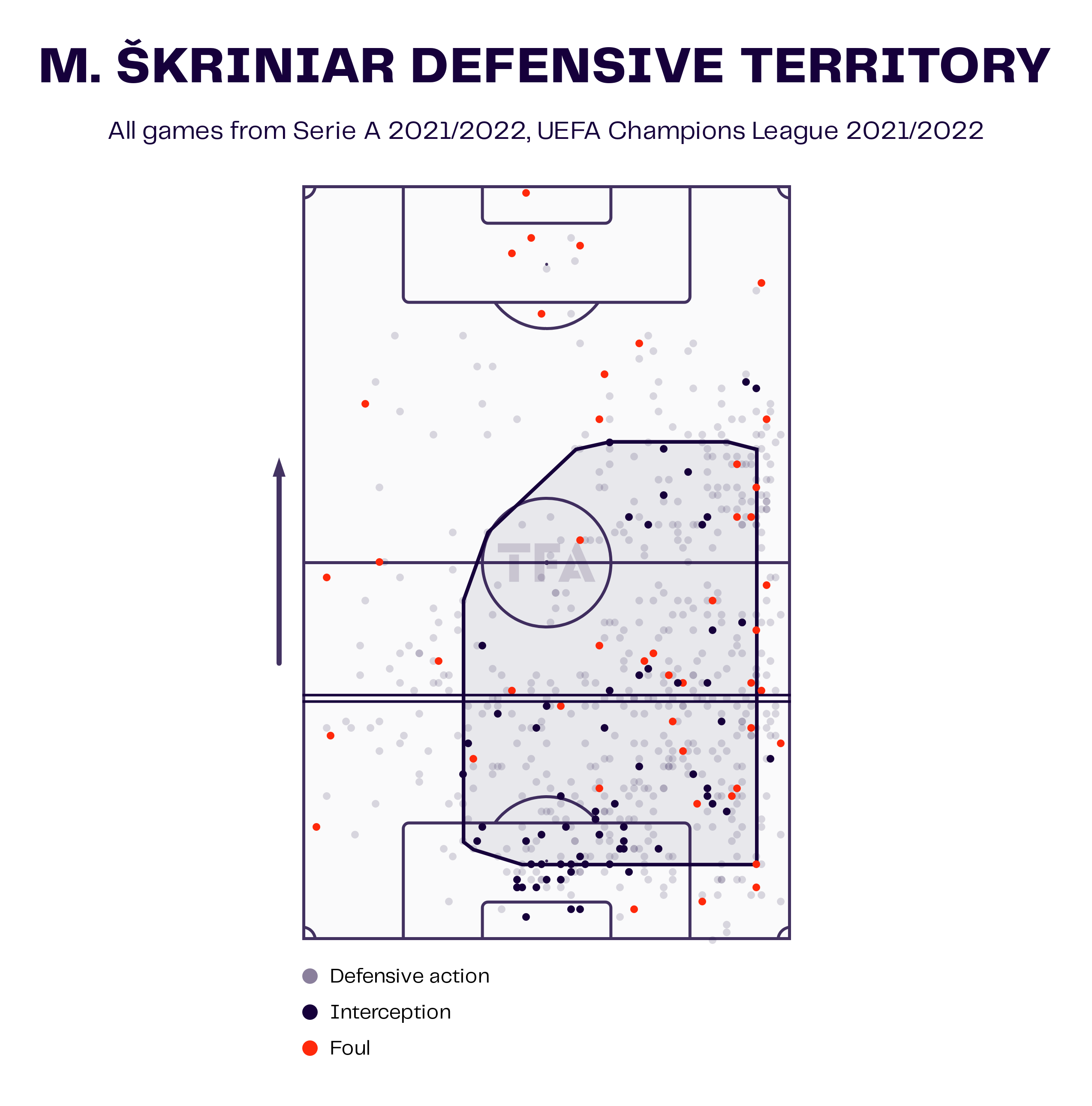 Last season, the 27-year-old averaged 13.12 duels per 90 minutes and had a 58.5% win rate. The interception rate was 4.09, and he committed one foul per 90 minutes. Skriniar gave away some fouls just outside the penalty box. This is a bit of a worry as these fouls could lead to a goal. 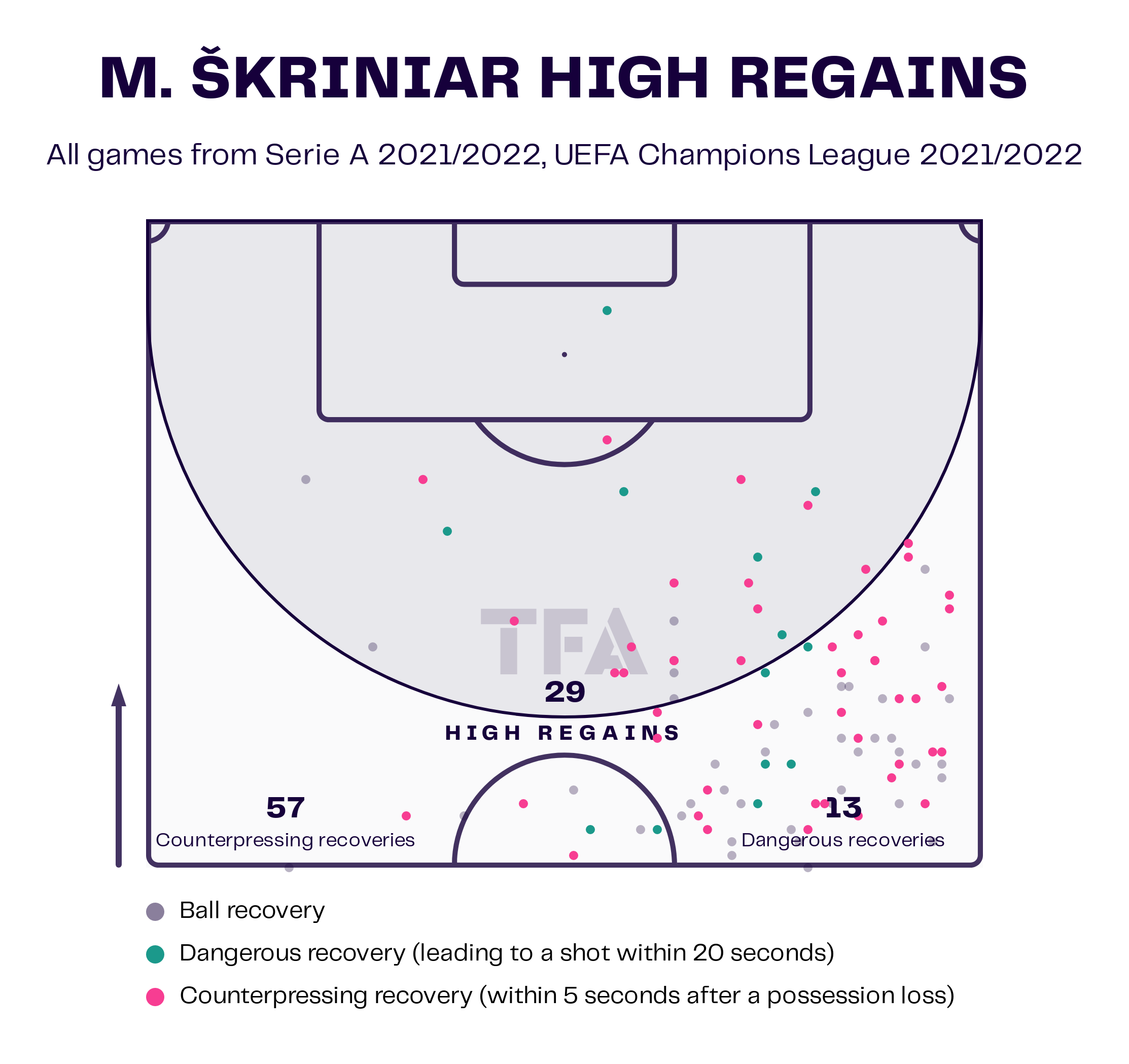 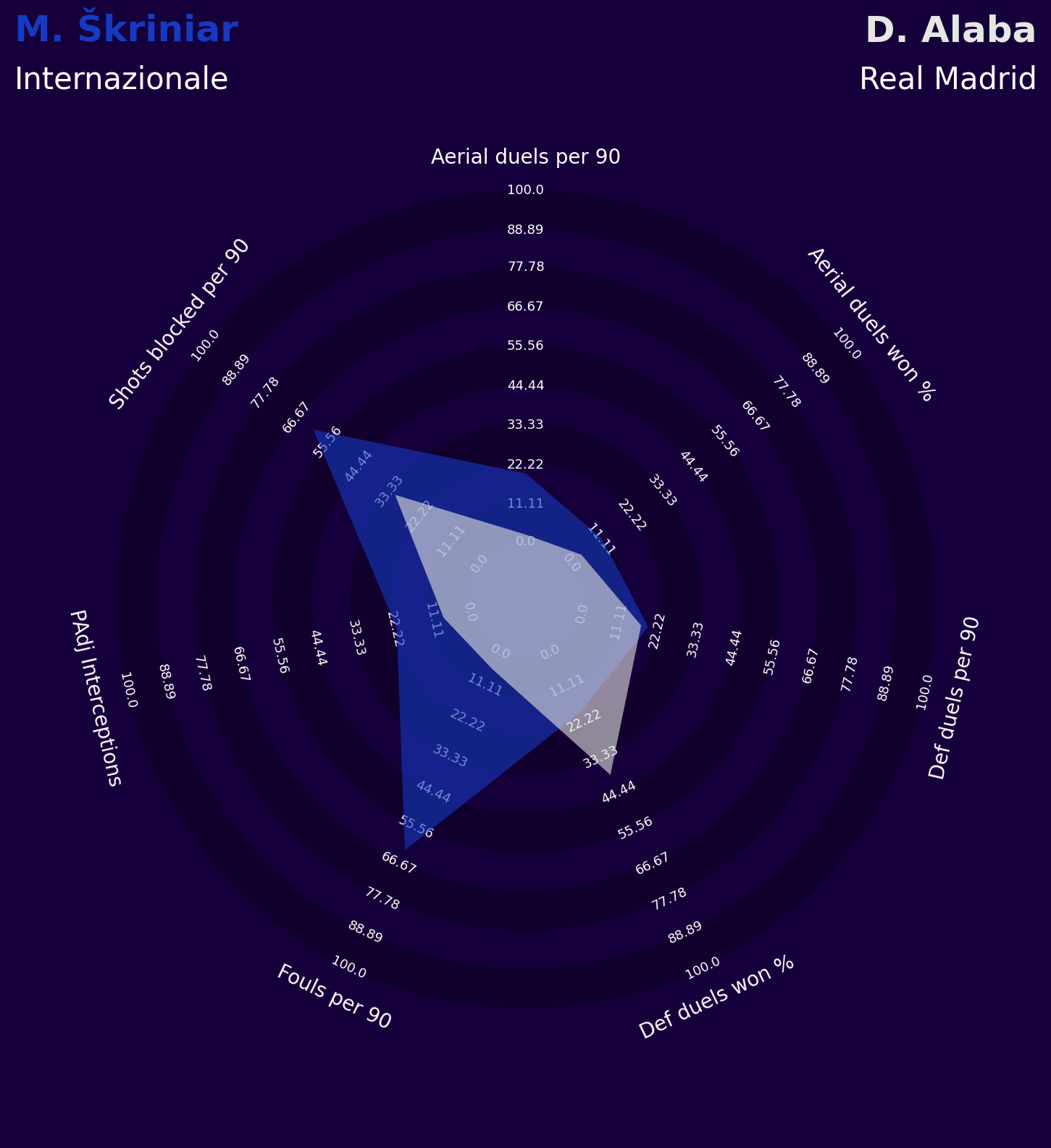 If Real Madrid signs the player, then it will be a bit tough for him to replace the players. The above viz compares the defensive stats of Skriniar with David Alaba. Milan Skriniar has won more aerial duels and has blocked more shots than the Real Madrid player. Alaba has a high defensive duels win rate. The Austrian might have won fewer duels, but the player has been consistent and can also play as a left-back. 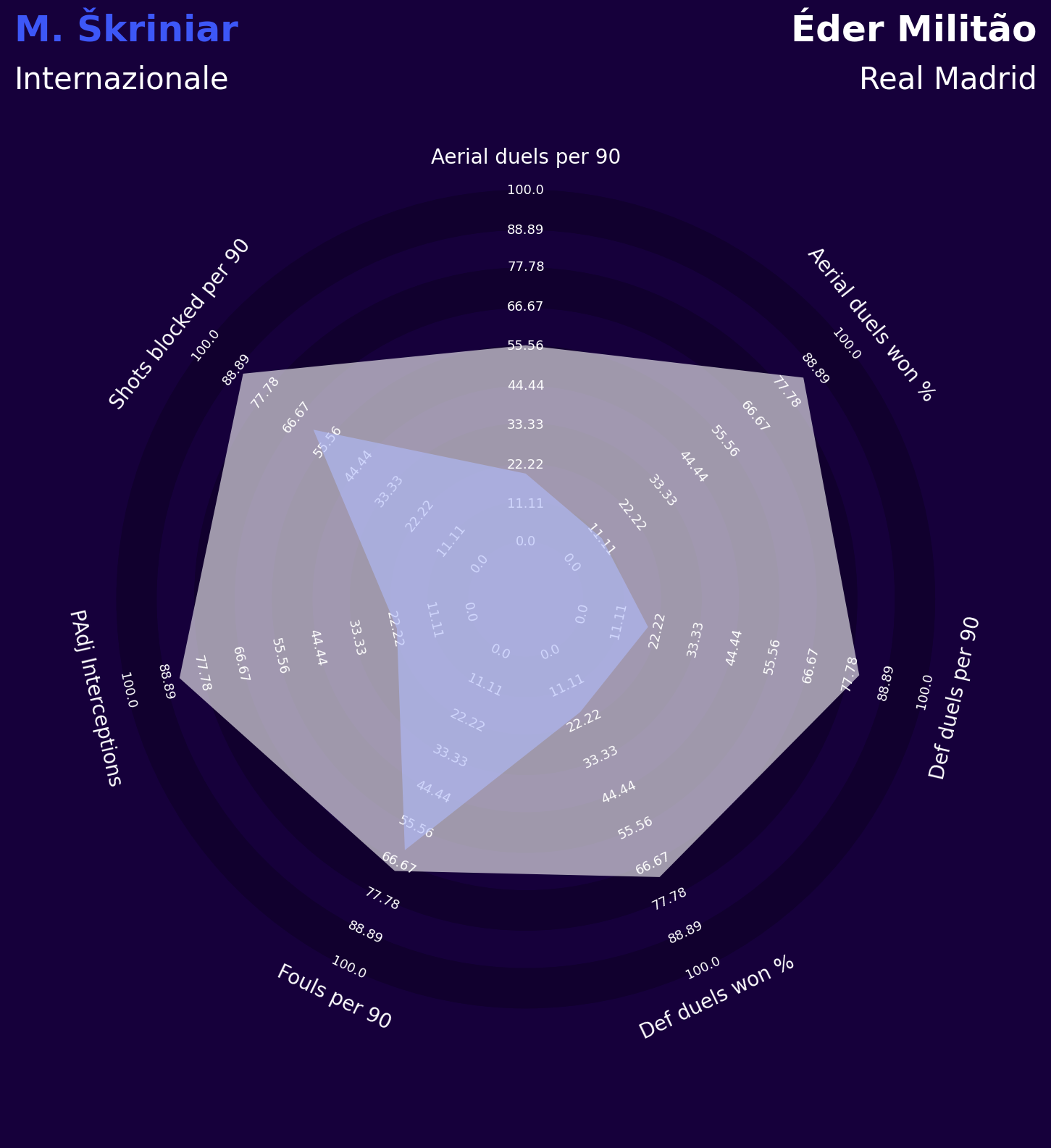 Eder Militao plays as the right centre-back for Real Madrid. He has a higher duel win percentage than the Slovakian. It won’t be easy for him to directly replace Militao in the starting 11.

Real Madrid could get an easy bargain next summer. He is a highly rated defender and could come in handy in the UEFA Champions League. However, it won’t be easy for them to sign the defender as he would demand more game time than what he is expected to get. Los Blancos might consider some other options in the future.