On Wednesday night Paris Saint-Germain welcomed Real Madrid to Le Parc Des Princes in their first Champions League fixture of the 2019/20 season. Both sides were knocked out in the Round of 16 last season and looked to begin their new campaign with a win. This tactical analysis will look at the tactics used by both Thomas Tuchel and Zinedine Zidane, as Paris Saint-Germain cruised to a comfortable 3-0 win.

Both sides fielded a 4-3-3 with PSG playing in white and Real Madrid in dark blue. Marquinhos was brought into PSG’s midfield to sit behind both Marco Verrati and Idrissa Gueye as part of a defensive midfield three. Real Madrid’s was far more attacking with Casemiro sitting behind James Rodríguez and Toni Kroos. PSG were notably without Kylian Mbappe and Neymar, but were still able to field a very exciting front three with Ángel Di María playing alongside summer signings Mauro Icardi and Pablo Sarabia.

Once Icardi came off in the 60th minute, PSG changed to a 4-5-1 with Di María playing as a lone striker. Real Madrid replied by changing to a 4-4-2 for the last 20 minutes as they sought a way back into the game. 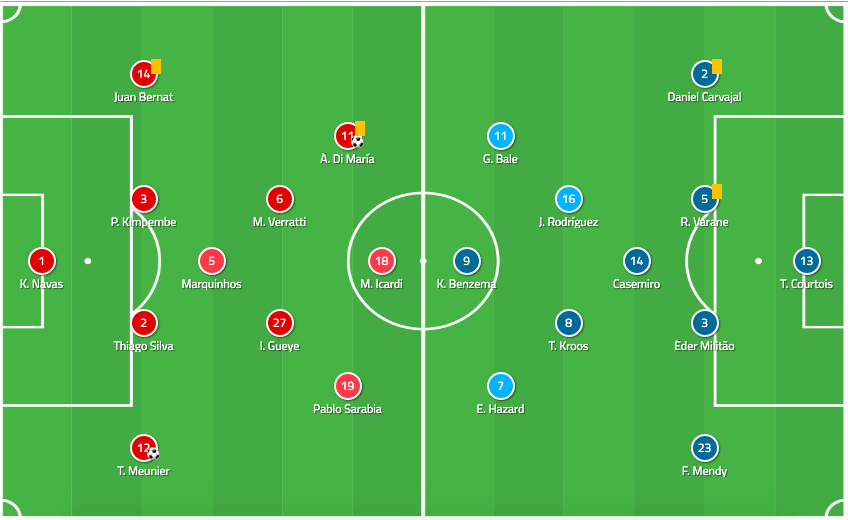 In the first half, PSG sat back and allowed Real Madrid to bring the ball forward. This was particularly the case after their first goal, where for the following fifteen minutes they allowed 29 passes per defensive action.

If you want to read the full article then head on over to our dedicated analysis site, totalfootballanalysis.com, or click HERE

If you love tactical analysis, then you’ll love the digital magazines from totalfootballanalysis.com – a guaranteed 100+ pages of pure tactical analysis covering topics from the Premier League, Serie A, La Liga, Bundesliga and many, many more. Buy your copy of the August issue for just ₤4.99 here

Real Madrid vs Liverpool: Thomas Muller makes his prediction for the...