The start of 2019 brought football back for Real Madrid, welcomed into Estadio de la Ceramica with a guard of honour following their Club World Cup win. However, it was the Real Madrid defence who gave a guard of honour to Santi Cazorla as he scored twice, his first goals in Spain since he left Malaga for Arsenal in 2012.

In between, two headers put the visitors back in the lead as Karim Benzema and Raphael Varane headed in from a cross and a set piece, but Santiago Solari’s men were left to share the spoils in a 2-2 draw. Here, our tactical analysis will use statistics to identify what key points Real Madrid can take from the game as they missed out on a chance to close the gap at the top of La Liga.

Fans may have been optimistic that 2019 would bring with it a new look to their Real Madrid side. However, that optimism was short-lived. In fact, it lasted just four minutes. One of the biggest disappointments of late 2018 was Marcelo, and it proved costly for his team again in the first outing of 2019. The Brazilian was caught out of position, easily turned inside out, and it exposed his team defensively significantly. 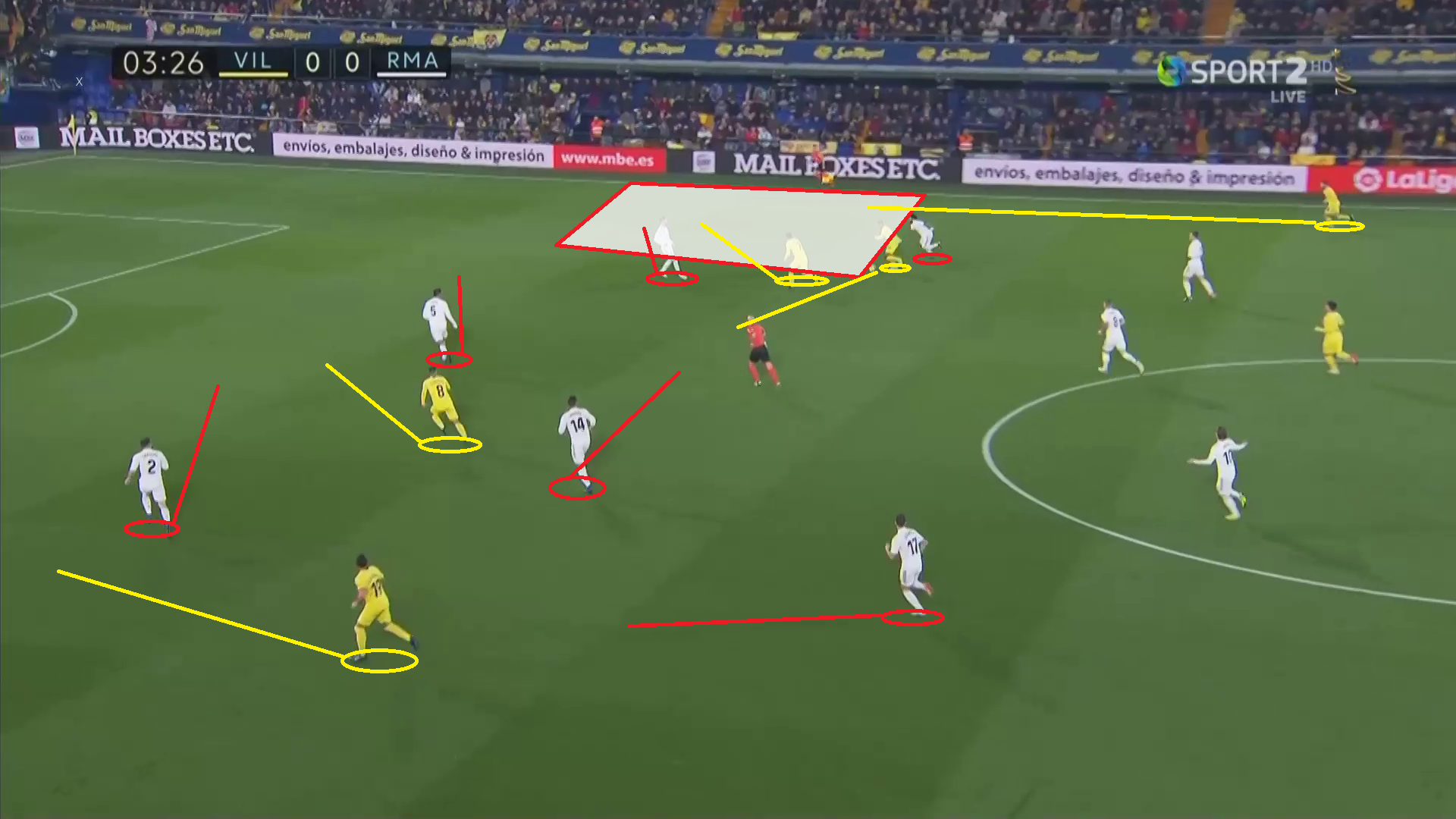 The whole backline were forced to move across to fill the gaping hole he left, while Casemiro was left to pick up the runner in the middle. With the attacking players, namely Lucas Vazquez, caught upfield, it allowed Santi Cazorla to occupy the space Dani Carvajal had vacated.

By the time the ball was played in to the former Arsenal man, he had almost a quarter of the pitch to himself. It was an exquisite finish which left Thibaut Courtois with no chance, but humiliated Madrid defensively. 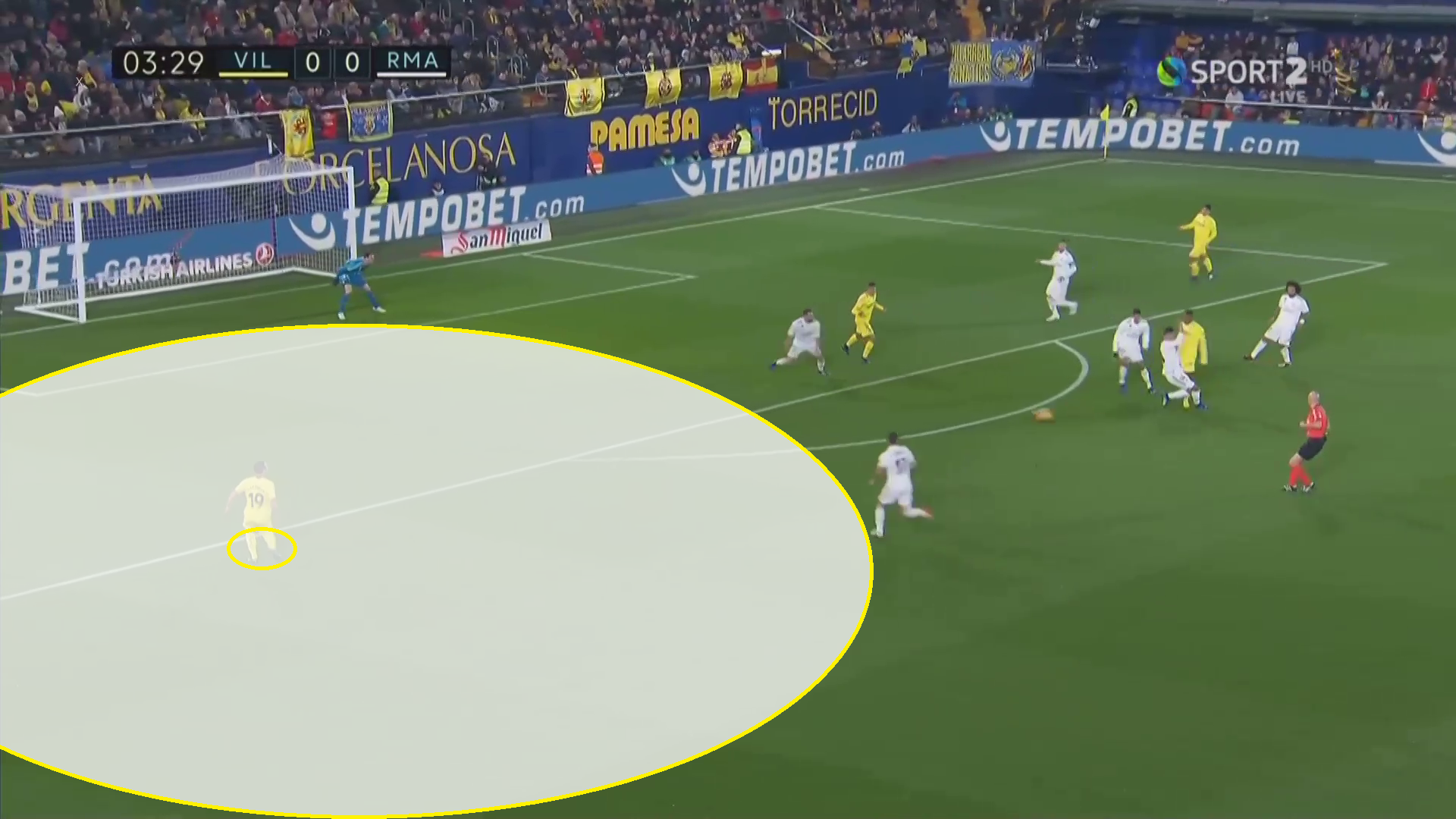 The second goal wasn’t much better either. At just 165cm tall, Cazorla doesn’t score many headers. In fact, his late equaliser was only the second time he has ever scored with his head, the first being against Reading for Arsenal in 2012. Again, Marcelo was partially to blame as neither he, Sergio Ramos or Isco identified Cazorla’s run and allowed him free space to score. 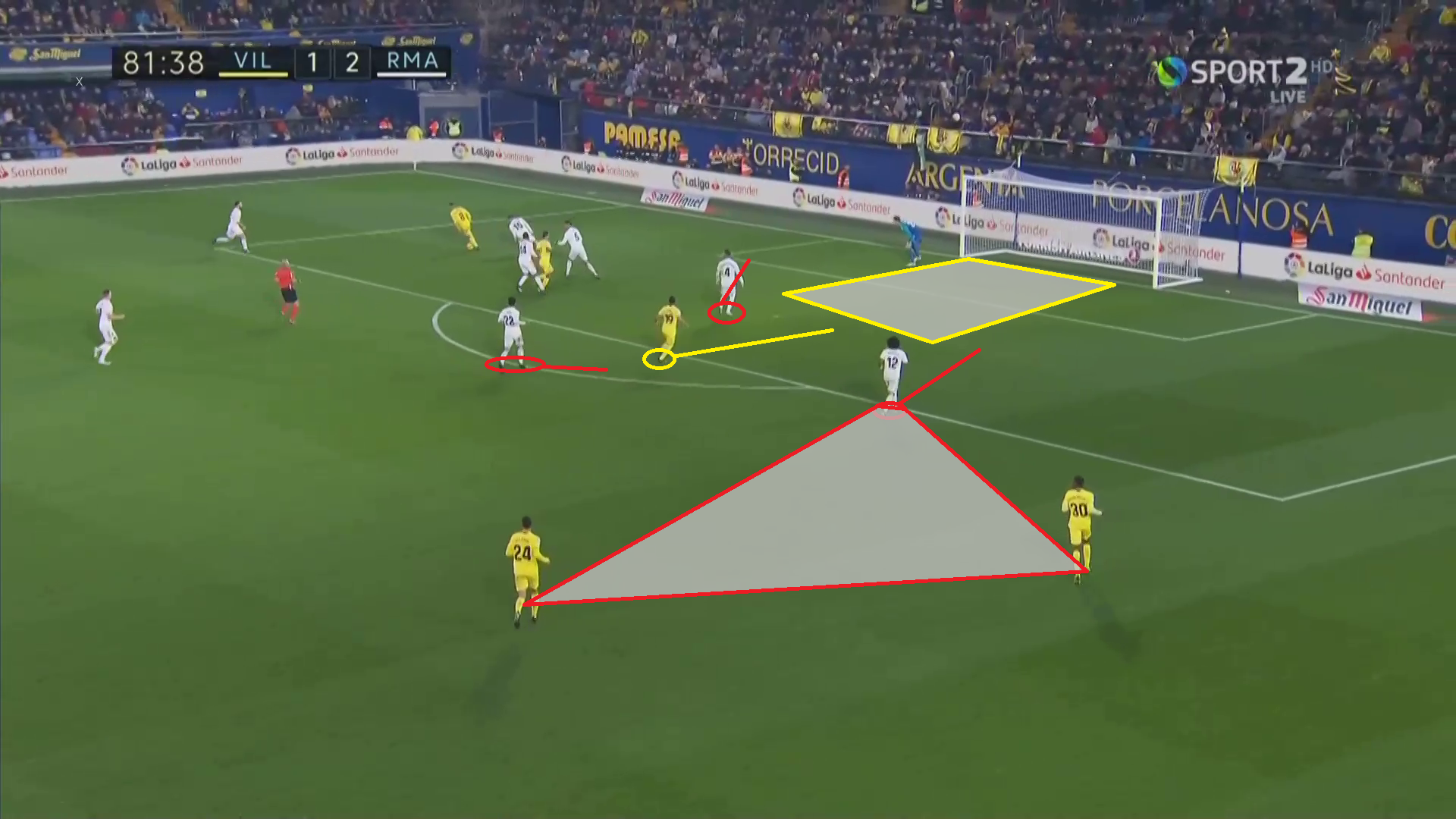 With Marcelo receiving no help from Vinicius on the left flank in attack, he was left keeping one eye on the two men in behind him. Ramos failed to look behind and was caught ball-watching, while Isco too was too slow and lazy to track his runner. A calamity of errors, but none of them particularly new or shocking for Real Madrid.

Solari is afraid to gamble

Yet again, Real Madrid appeared reluctant to ever dominate and take control of the game. Having taken the lead before half-time, Solari opted to allow his team to sit deep and protect their lead, rather than looking to extend it. Playing with a 4-5-1 shape at times in the game, Solari seemed content to nullify Villarreal’s attack and attack only on the break.

Up against a team who are battling relegation and devoid of confidence, that is not the kind of ambition that fans have come to expect after being European champions for three consecutive years. Threatened by the pace of Samuel Chukwueze, Solari’s reaction was to push his team back and close down the spaces, rather than limit the forward runs of his full-backs.

With Casemiro dropping in to become a third central defender at times, it was a surprisingly defensive outlook. It led to Karim Benzema becoming frequently isolated, despite all of the attacking options available from the bench. 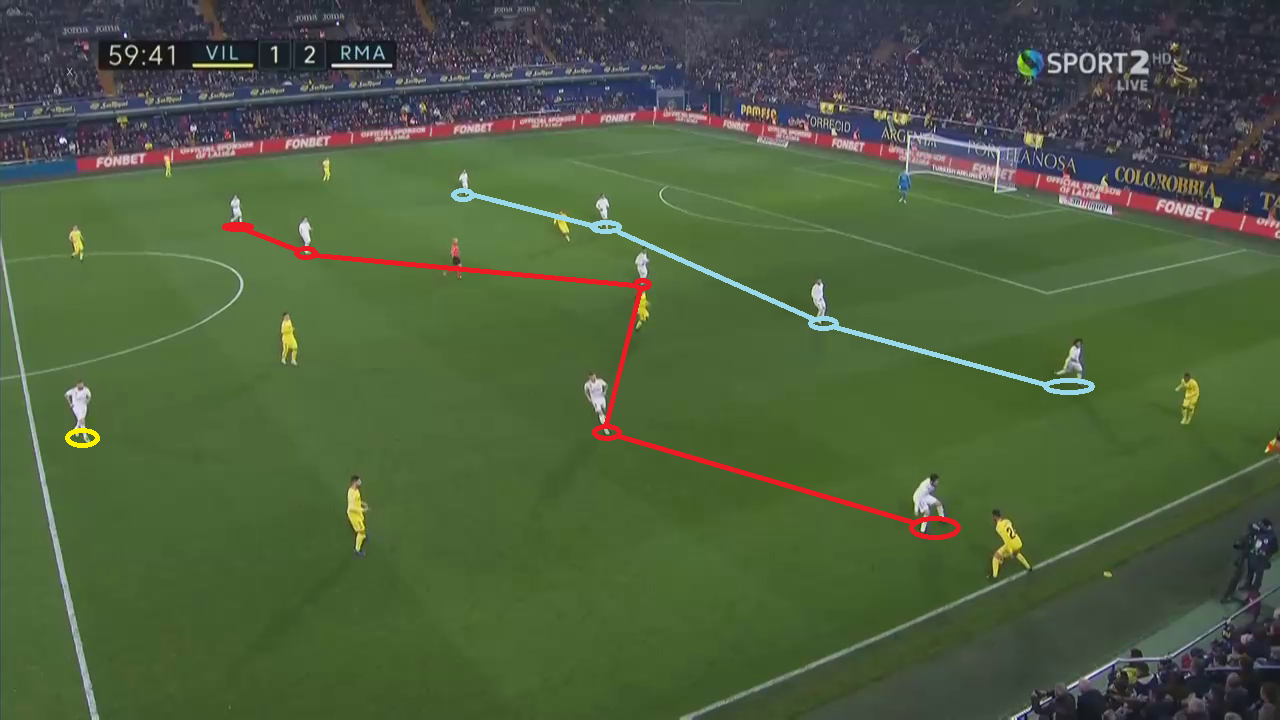 Even after Cazorla’s late equaliser, Real Madrid did not offer much more when going forwards. Solari stuck with Casemiro and Federico Valverde in midfield, having taken off gamewinners like Luka Modric and Gareth Bale, albeit the latter through injury. Without the bravery to attack and take risks, Real Madrid fans can become accustomed to disappointing results and narrow victories, even against teams like the Yellow Submarine who are struggling at the wrong end of the table.

Marcos Llorente was missed, even with Casemiro back

After starting eight games in a row, Marcos Llorente’s first-ever muscle injury sidelined the midfielder and allowed Casemiro an open path to the starting line-up having returned from injury. However, this again fed into the lack of ambition from Real Madrid on Thursday evening.

Of Casemiro’s 51 passes, only three were destined for the final third. In Llorente’s most recent league outing, nine of his efforts were into the same area. Whether it was the cause or the effect, it was evident that Casemiro lacks the dynamism in possession of Llorente, who consistently looks to bring the ball out from deep.

With the Brazilian on the field, Solari can expect less action on the ball and more breaking up of play. However, the recoveries were down too, with 56 recoveries representing the lowest figure of the season. When Llorente does return, the coach could face a real selection dilemma, particularly in games such as this against sides who are prepared to sit deeper and attack on the counter. 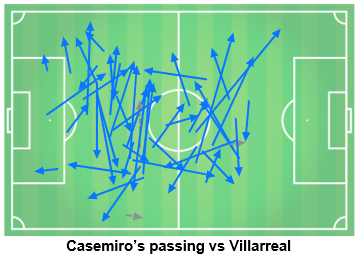 Patience may be needed to allow Casemiro to regain his form having missed several weeks of action, but it is something that Los Blancos can ill afford. Upcoming fixture congestion with Copa del Rey, La Liga and Champions League action means that Real Madrid do not have a full week off until the international break in mid-March. Ensuring that the team remain competitive in all of those tournaments is essential to avoid even more disillusion on and off the field.

The end of Mr Consistent’s consistency?

Lucas Vazquez has been the safe bet for Zinedine Zidane, Julen Lopetegui and Solari. A regular pick for all three coaches, he has lacked the wow factor of the likes of Isco, Marco Asensio or Vinicius Junior. He has rarely let the team down either, contributing defensively as well as on the attack. On Thursday, however, he did just that, and was twice at fault in crucial, decisive moments.

The first came for the first goal, where Vazquez was caught too far upfield and was too slow to track back. This allowed Cazorla acres of space to open the scoring in the early stages of the tie.

The second proved to be just as costly, as some brilliant work saw him break through one on one with Sergio Asenjo, only to fire the ball straight at the Villarreal goalkeeper. It showed a lack of composure when he could have gone around the already committed shotstopper, played in Karim Benzema or taken another touch to place his effort. Instead, it was an easy save for Asenjo and the score remained at 2-1. 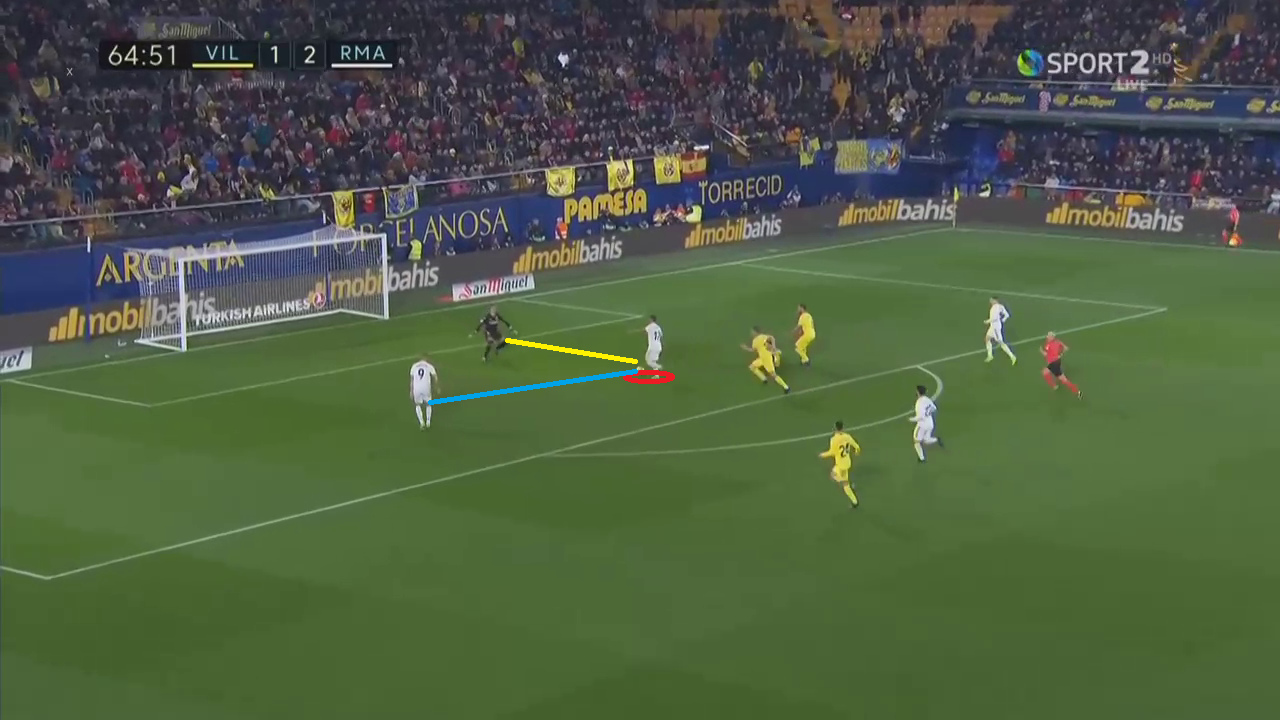 Vazquez has been under little pressure after returning to action after the winter break, with Solari still reluctant to give game time to Vinicius and with Asensio sidelined. However, with the winger struggling for form, the coach may well feel that it would be better to gamble on the young Brazilian. Another option would be to rush back Asensio to add that clinical edge which Vazquez lacks and cost his team on Thursday.

Real Madrid can feel lucky to have got away with a draw from this one, despite having clearly possessed more quality. They failed to create chances, being even more disappointing when attempting to convert them, and were too happy to settle for a 2-1 lead. When defensively sound, such an approach may work. Currently though, their defence is too lacklustre to protect such narrow leads. It is clear that there is work to do if 2019 is to live up to the success of recent years.

If you love tactical analysis, then you’ll love the digital magazines from totalfootballanalysis.com– a guaranteed 100+ pages of pure tactical analysis covering topics from the Premier League, Serie A, La Liga, Bundesliga and many, many more. Get your copy of the FIRST of two December issues for just ₤4.99 here, or the SECOND of the December issues with an annual membership right here.

How are Madrid Shaping Up This Season?