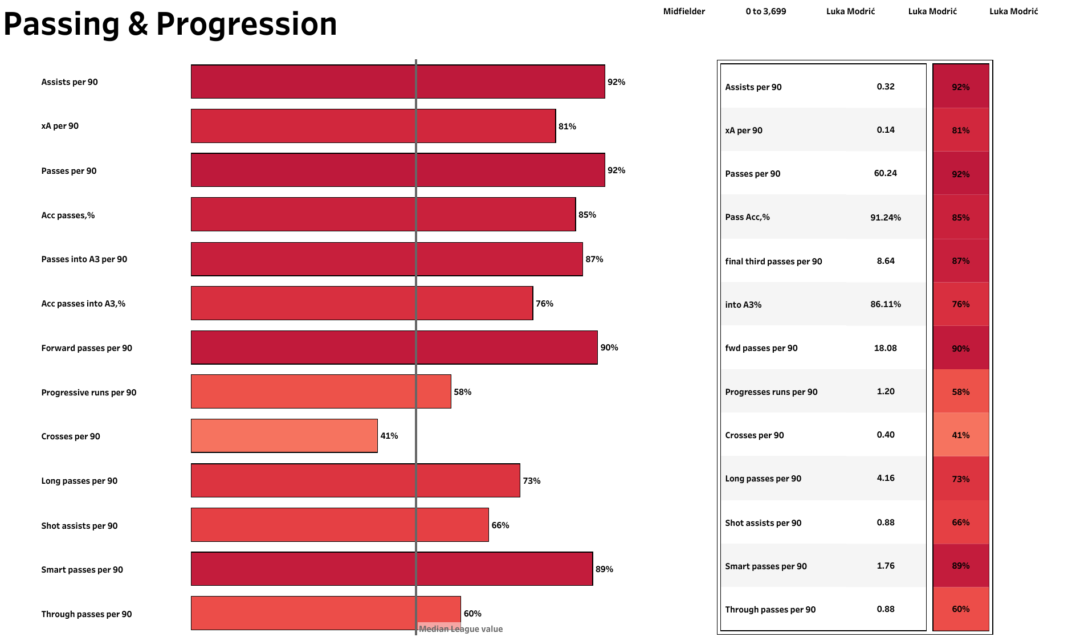 Real Madrid had one of their most successful campaigns in recent years in the 2021-22 season, winning the LaLiga and most importantly, the UEFA Champions League. The resurgence of Karim Benzema played a part, and so did Vinicius Junior’s development. However, one man who has still got it and has pulled the strings from midfield at the ripe old age of 36 is Luka Modric. The Croatian veteran had his best campaign in several years at the Santiago Bernabeu and in this article, we will see the crucial role Modric played in Los Blancos regaining the UEFA Champions League. 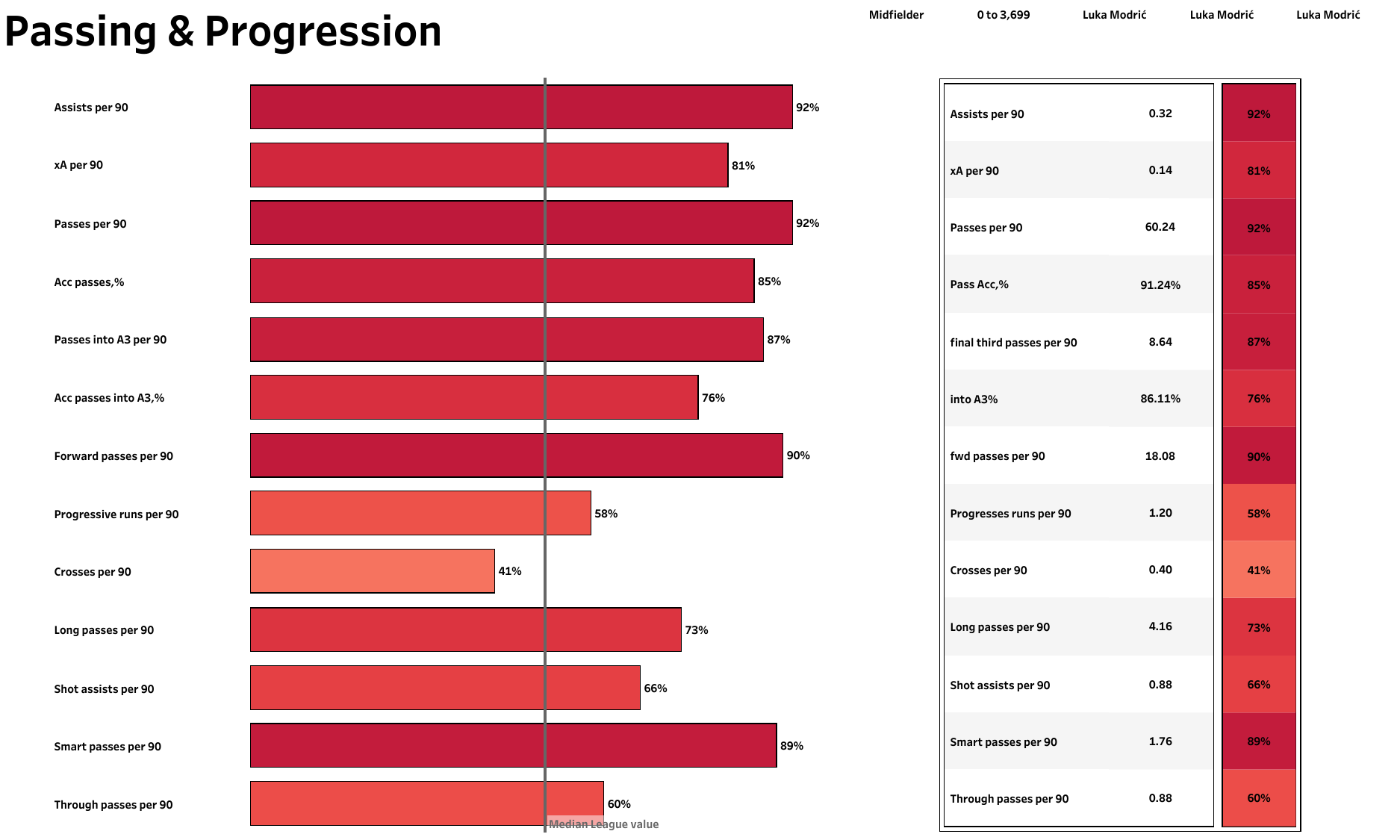 Modric played in all 13 games of Real Madrid’s victorious UEFA Champions League campaign, spending 1,073 minutes on the pitch. The midfielder may not have scored a goal, but he provided four assists, which were more than twice what xA predicted. In terms of per 90 values, the Croatian man had 0.32 assists per 90 against an xA of 0.14 per 90. This rate of assists ranked Modric in the top 8% of midfielders. The 36-year-old attempted 60 passes per 90 at a very high pass accuracy of 91.24%. Additionally, he attempted 8.64 passes into the final third per 90 and found a teammate on 86.11% of the occasions. Modric also showed his footballing IQ by completing 1.76 smart passes per 90. 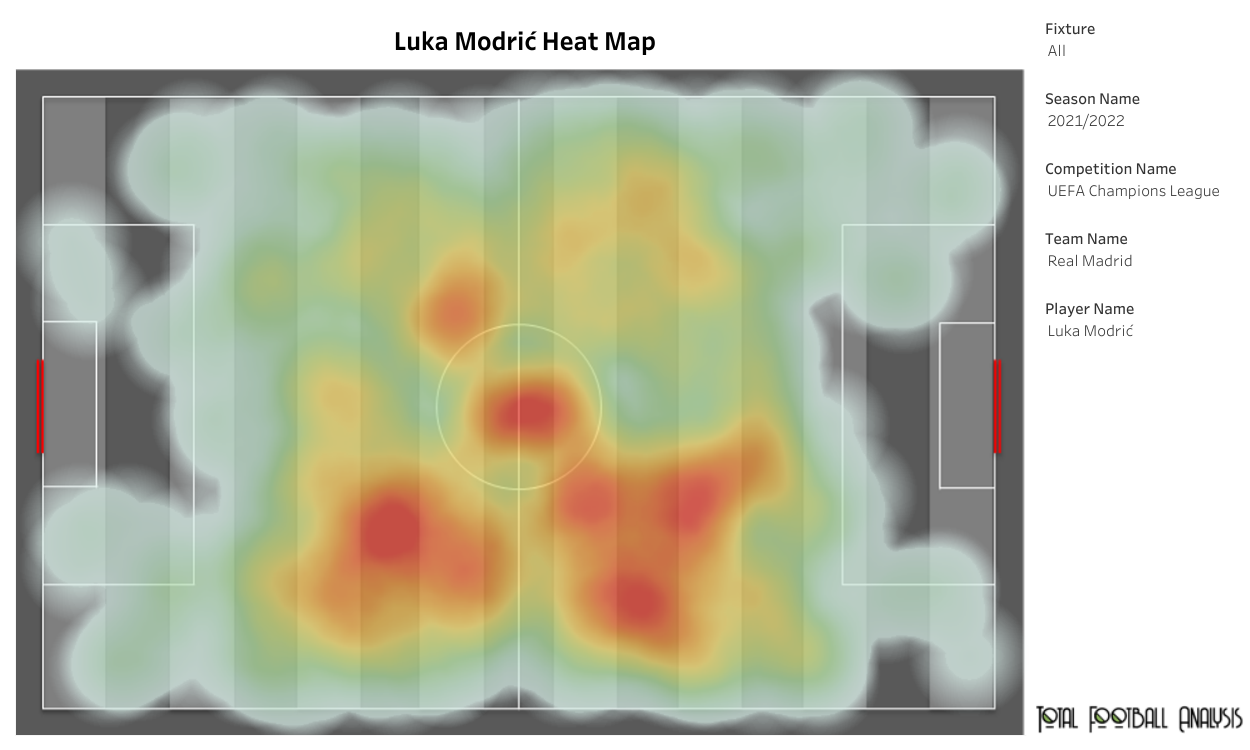 Displayed above is the heat map of Modric in the UEFA Champions League season just gone by. As a right central midfielder, he took control of that side of the pitch in the defensive third, midfield as well as in the attacking third. In his 1,073 minutes of game-time, the Croatian completed 66 progressive passes, 71 passes into the final third, 14 key passes and passes into the opponents’ penalty box each, 63 progressive carries and 16 carries into the attacking third. On the defensive end, the veteran midfielder attempted 177 pressures and 33 tackles and interceptions. 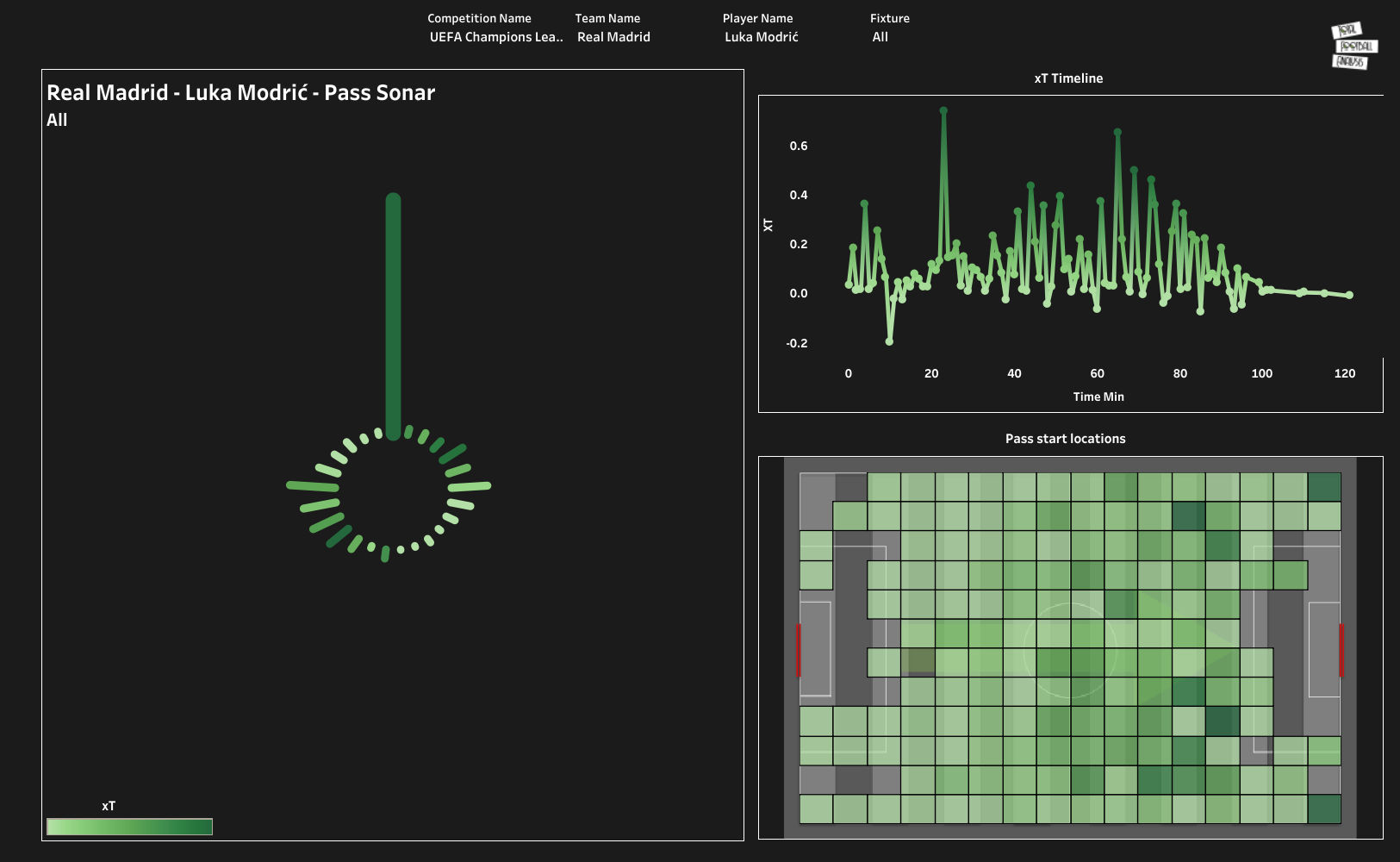 The above viz shows the pass sonar, xT map and xT timeline of Modric in the 2021-22 UEFA Champions League. Judging by the timeline, he generated an average xT value of over 0.4 per match. Most of his threat came from the standard forward passes. However, his dribbling success rate of 65% also produced a considerable threat for Los Blancos, particularly his mazy run against PSG for Real Madrid’s second goal in the second leg of the Round of 16. And who can forget the outside of the boot assist to Rodrygo against Chelsea in the second leg of the quarter-final?

Being a highly influential member of the Real Madrid squad, it was no surprise to see Luka Modric sign a one-year contract extension at the Santiago Bernabeu as a reward for this highly successful campaign.