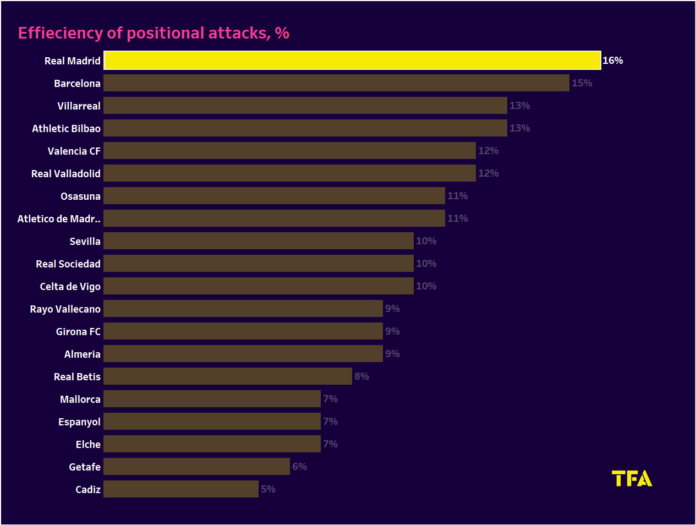 Real Madrid will play host to Osasuna in round seven of the LaLiga 2022/23 season. The home team is the only team with a 100% start this season. Osasuna have also made a good start by winning four of the six matches played this season.

Real Madrid’s title defence has started with six wins in six matches. Carlo Ancelotti’s men have scored 17 goals and conceded six. They average 2.16 xG and 1.24 xGA per match. The Los Blancos have the highest passing accuracy in the league at 90.8%, and this is one of the reasons behind their successful start to the season.

Osasuna began the season with back-to-back victories before suffering a defeat. They repeated the process once again and are fifth in the LaLiga table with 12 points. Osasuna have netted seven goals with an average xG rate of 1.71. The defence has been good and has only conceded five goals. 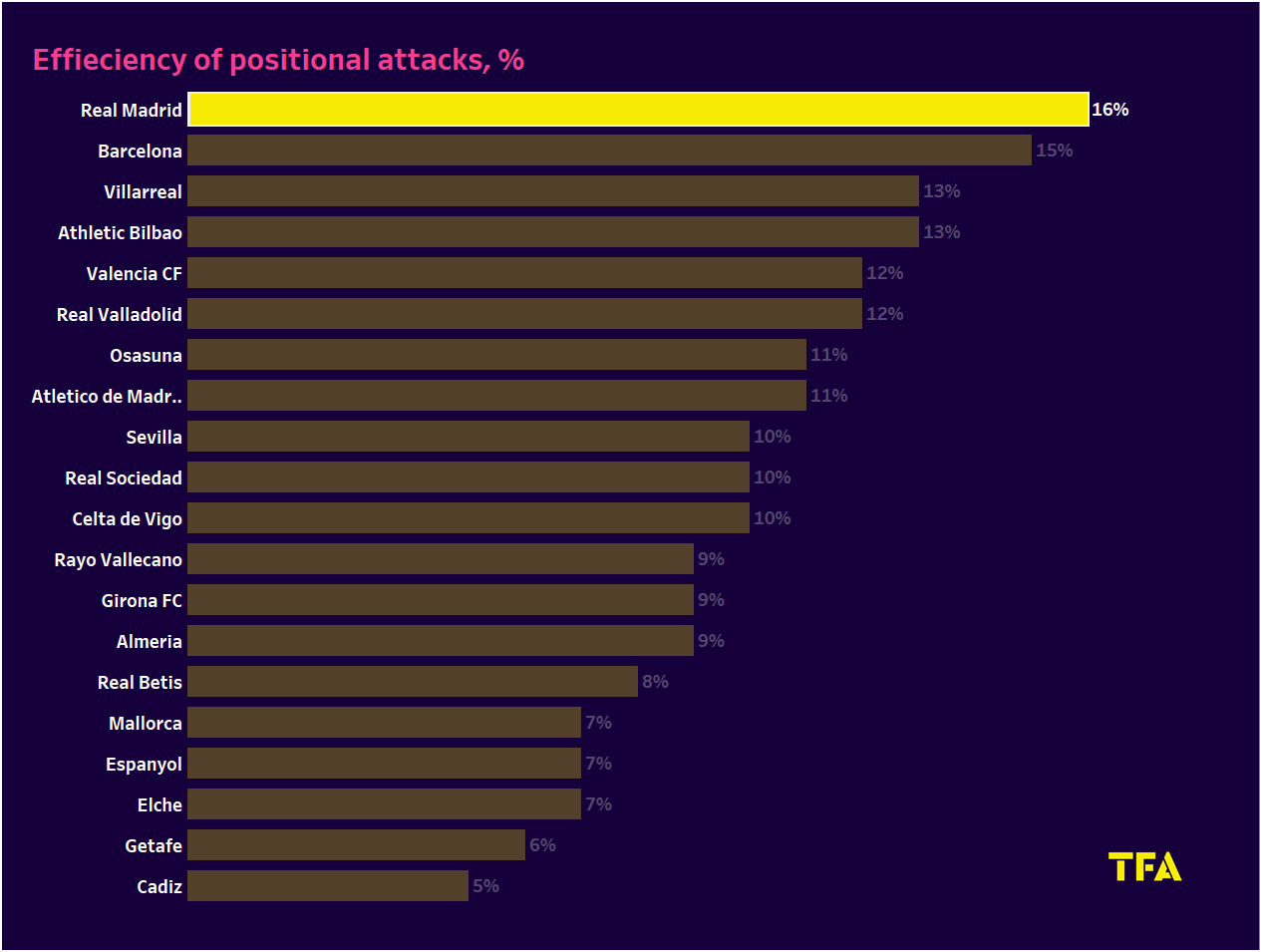 Carlo Ancelotti’s men have stuck to the game plan and this has led to a high-efficiency rate as well as a high accuracy rate in passing. They average 33.17 positional attacks per match and attempt ten shots from these attacks. Overall, their shooting average is 18.5 shots per match and 37.8% of these shots have been on target. Apart from this, Real Madrid can also hit the team with a counterattack. The Los Blancos are capable of running against any defence with an average of 5.17 counterattacks per match. 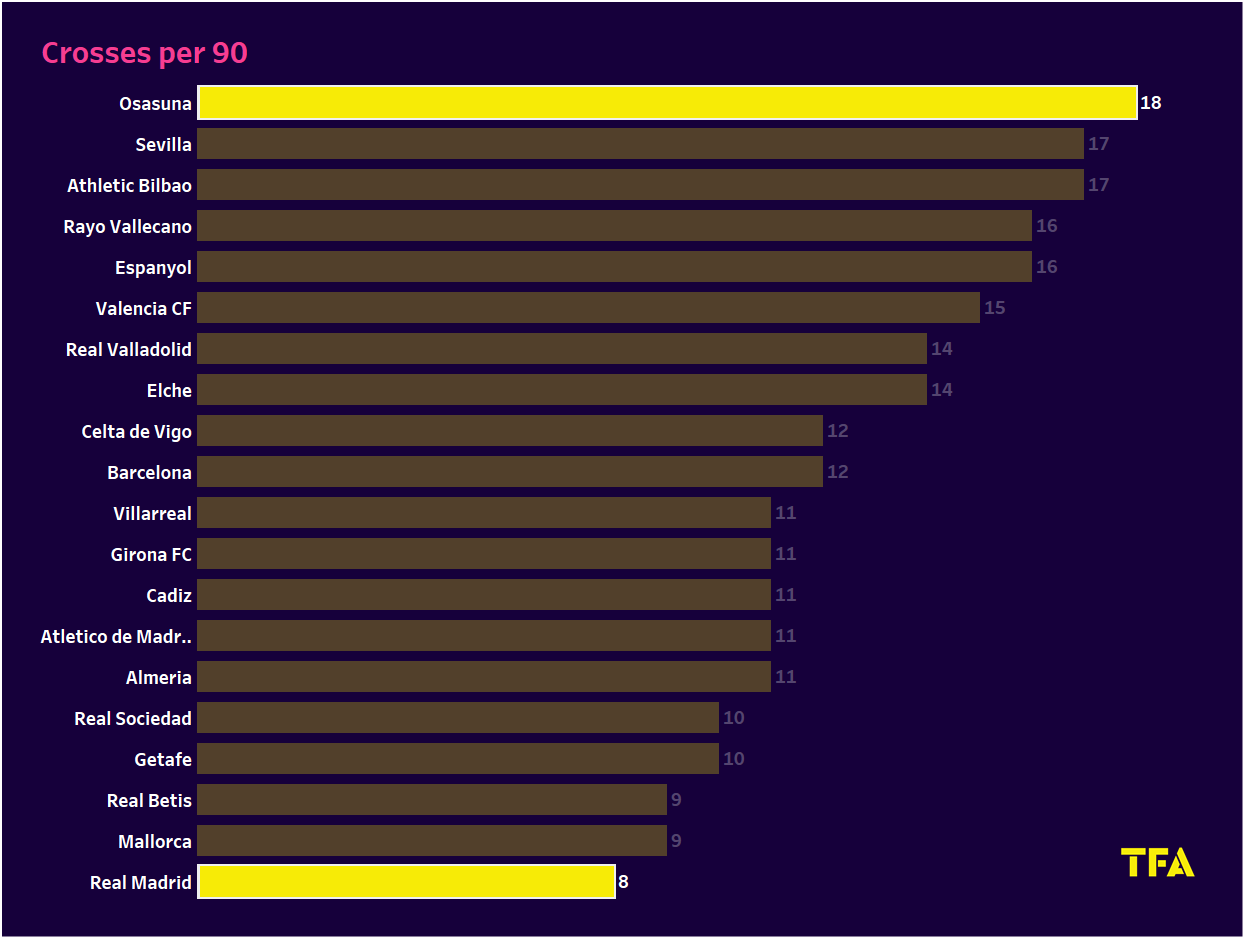 Osasuna are also an attacking side and averages 31.83 positional attacks per match. They attempted around seven shots from these attacks. The shooting average is 12.5 shots per match and the accuracy rate is 30.6%. Osasuna players like to attempt crosses and have the highest average for crosses per 90 minutes in the league. Real Madrid are at the bottom of the benchmark. Osasuna players have a decent accuracy rate of 39.2%. This will encourage them to test Real Madrid’s defence. 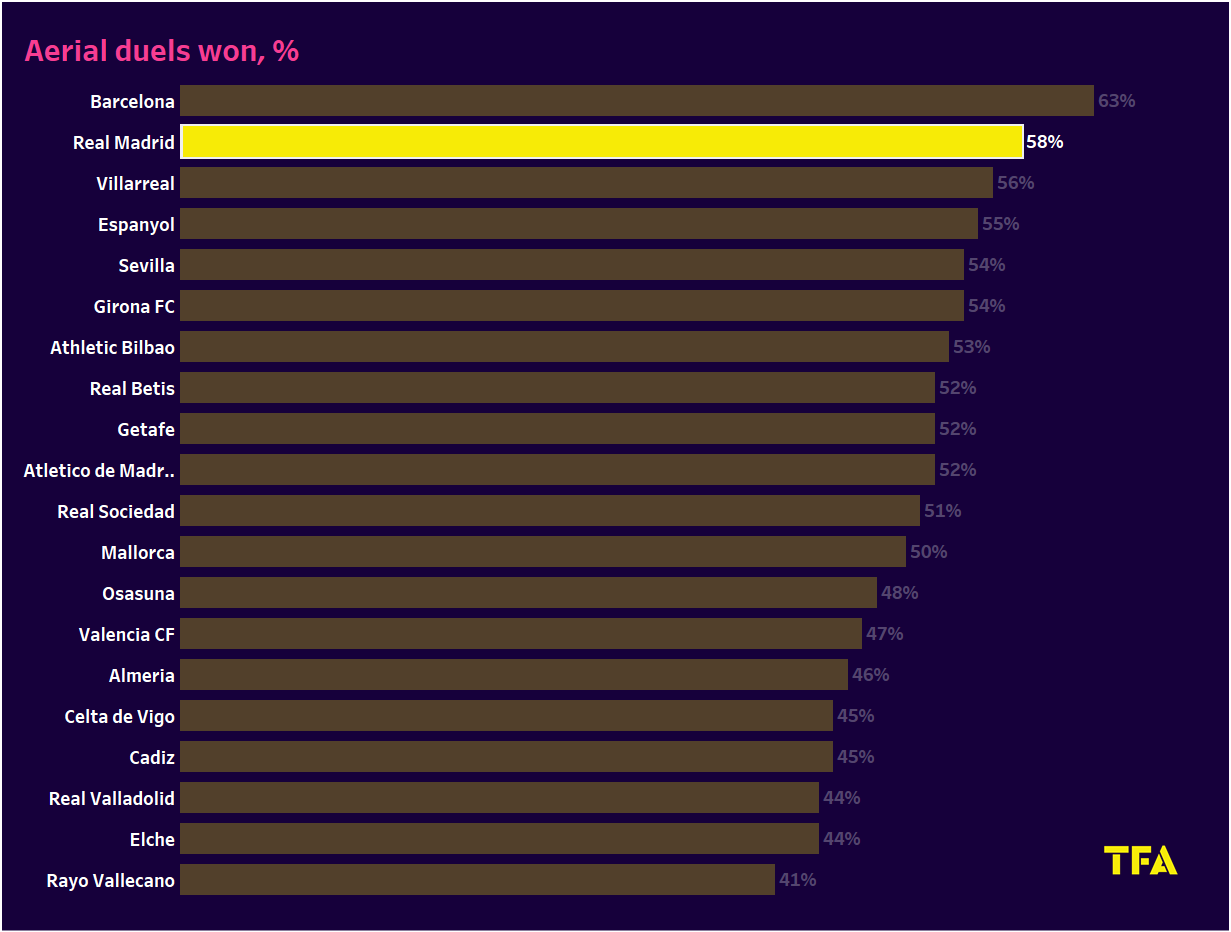 However, Real Madrid have some world-class defenders who can deal with such danger. The players have won 60.5% of the defensive duels and 58.7% of the aerial duels per match. They won’t give an easy goalscoring opportunity to the opposition in this match. 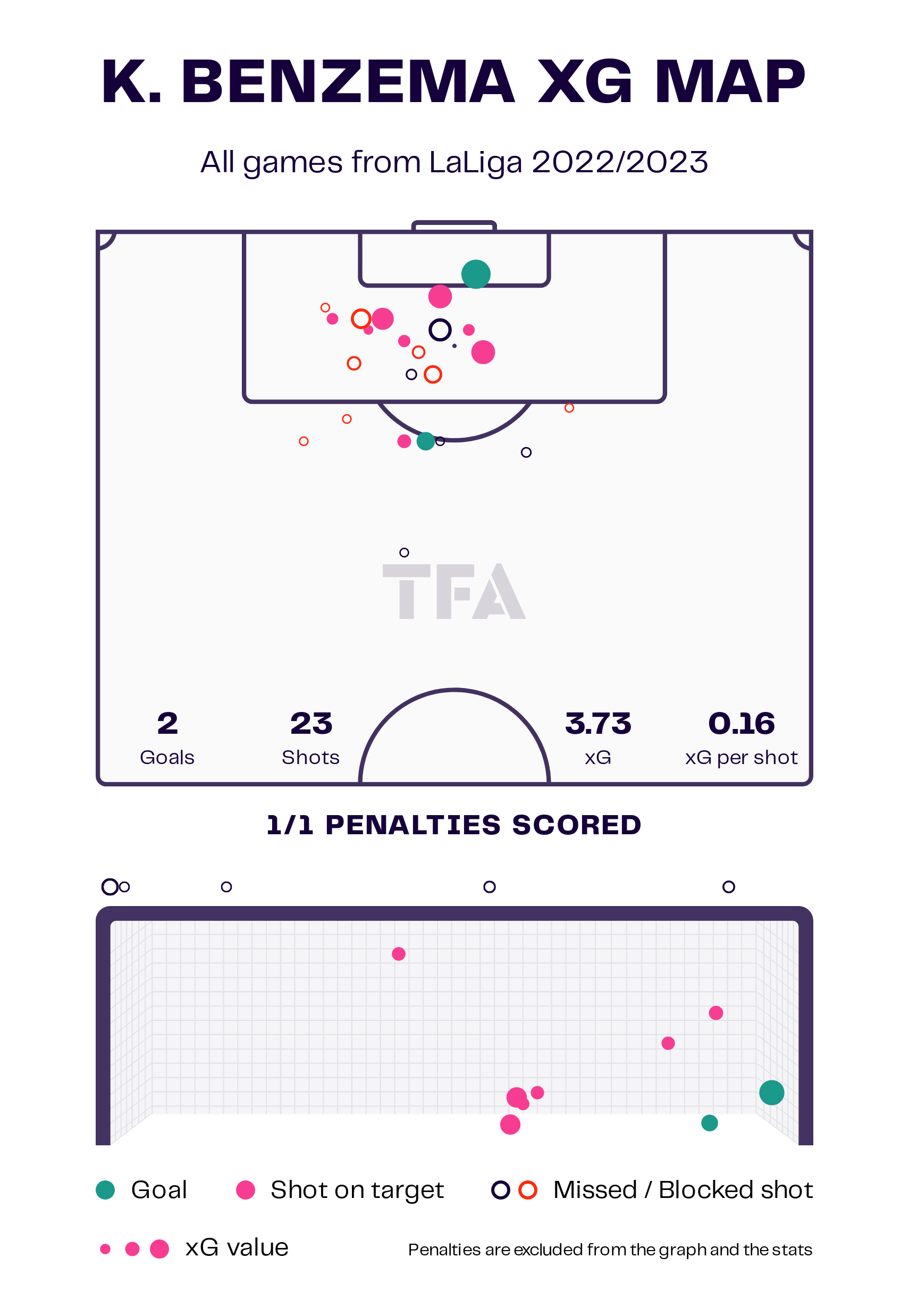 Karim Benzema has returned to training and is likely to feature in this game. The Frenchman has played in four LaLiga games for Real Madrid and scored three goals. All the goals were scored from three different positions. One came from the penalty spot, one from inside the 6-yard box, and one was scored from outside the penalty box. Karim Benzema likes to target the left side of the goalkeeper and has been successful in finding the bottom corner. 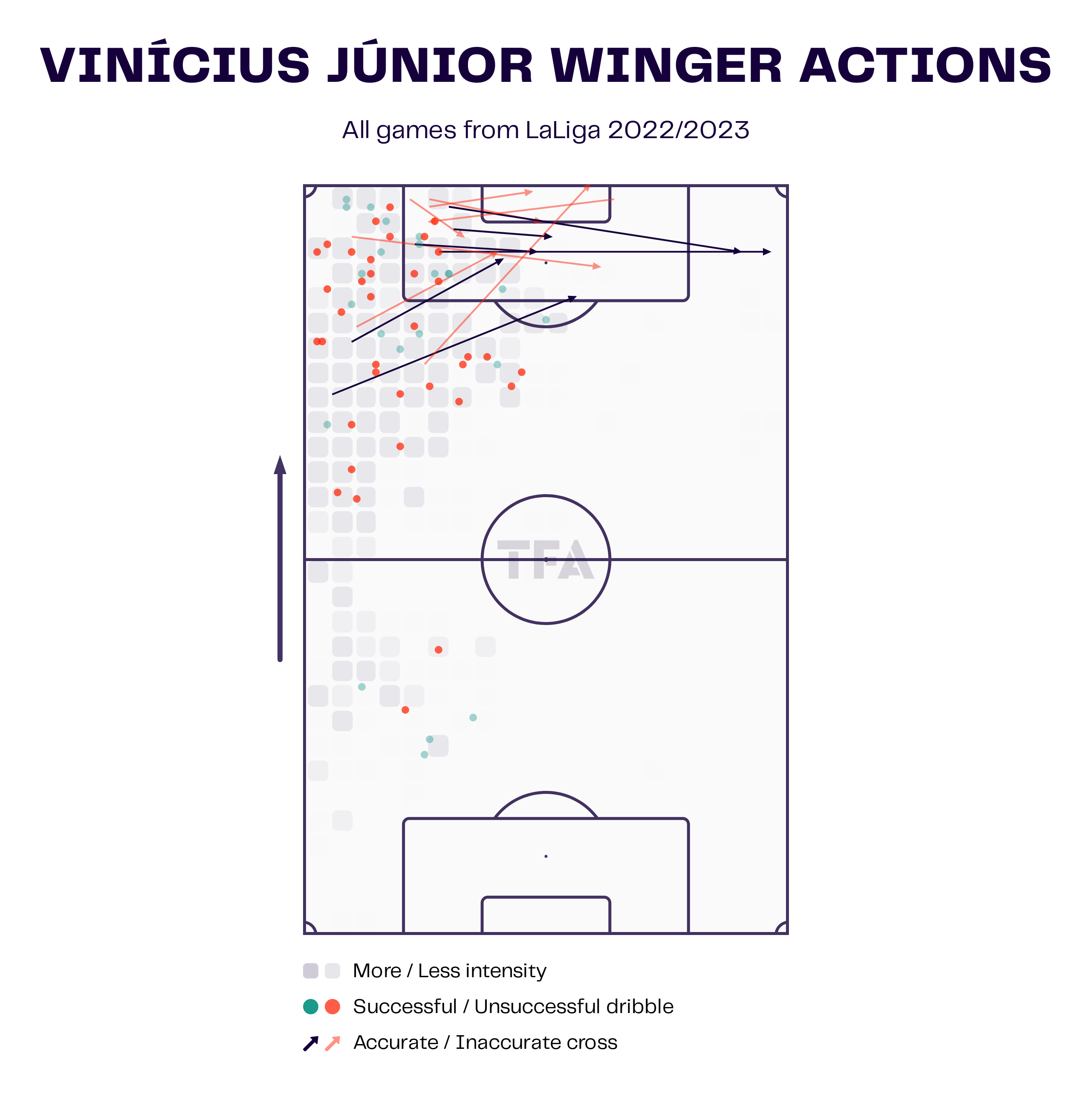 Vinicius Junior will also play a key role in this match. He has linked quite well with Karim Benzema in the past, and these two are capable of creating 2-3 goalscoring opportunities in every game. Vinicius Junior is the top goalscorer for Real Madrid in the league. The Brazilian has four goals to his name along with an assist. He likes to dribble past the defenders on the edge of the penalty box and has been able to penetrate the box on a few occasions. Vinicius will look to be creative in this match.

Real Madrid will be without Luka Modric for this fixture. The player got injured during international duty and is likely to miss their next match as well. Dani Ceballos could replace the veteran in Carlo Ancelotti’s three-man midfield. Karim Benzema’s return from injury will be a big boost for the Los Blancos. He is unlikely to spend 90 minutes on the pitch.

Osasuna will be without Ezequiel Avila, who is serving a suspension for a red card in their last match against Getafe.

Real Madrid will be focused on keeping their 100% start to the 2022/23 season. Karim Benzema’s return will be a big boost for the team. They have found ways to take three points from every game. Carlo Ancelotti also has some impact players on the bench, and they will also play a key role in this match. Osasuna are likely to drop points for the third time this season.

Lucas Vazquez: A former liberator now in the shadows

Is Zidane on the verge of joining Juventus?