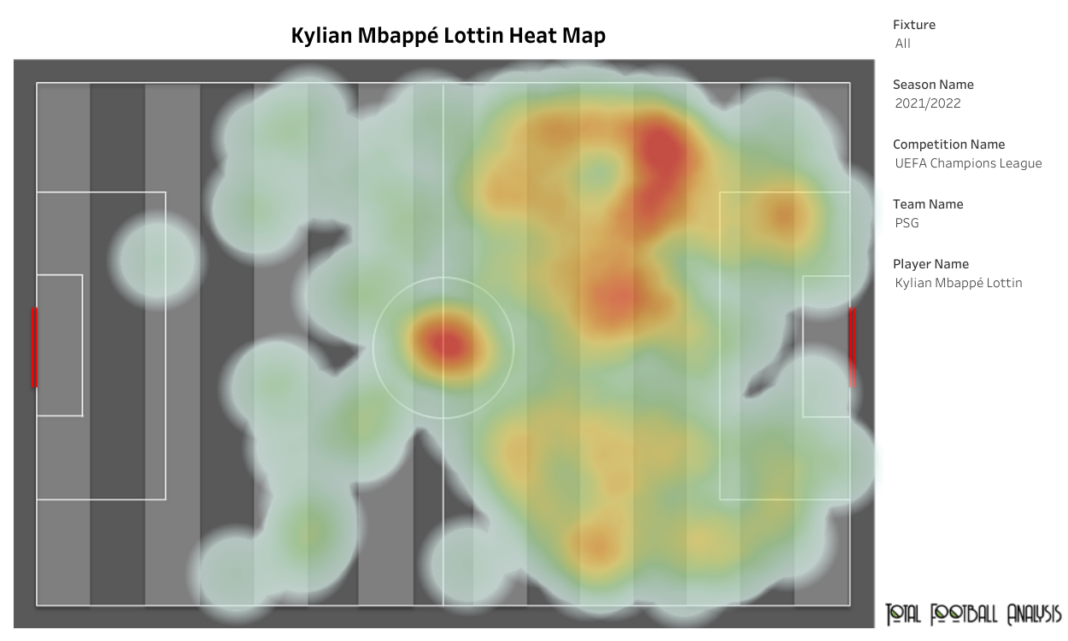 Barring a miracle, Kylian Mbappe is all set to join Real Madrid this summer on a free transfer. The team will most likely announce it after the Champions League final on 28th May. Not since Cristiano Ronaldo’s signing will there be a bigger statement signing, not just for Los Blancos, but across the football world. It might also be the first Galactico signing on a free transfer for Florentino Perez. In this article, we will look at how the 23-year-old World Cup winner will fit into Carlo Ancelotti’s system. 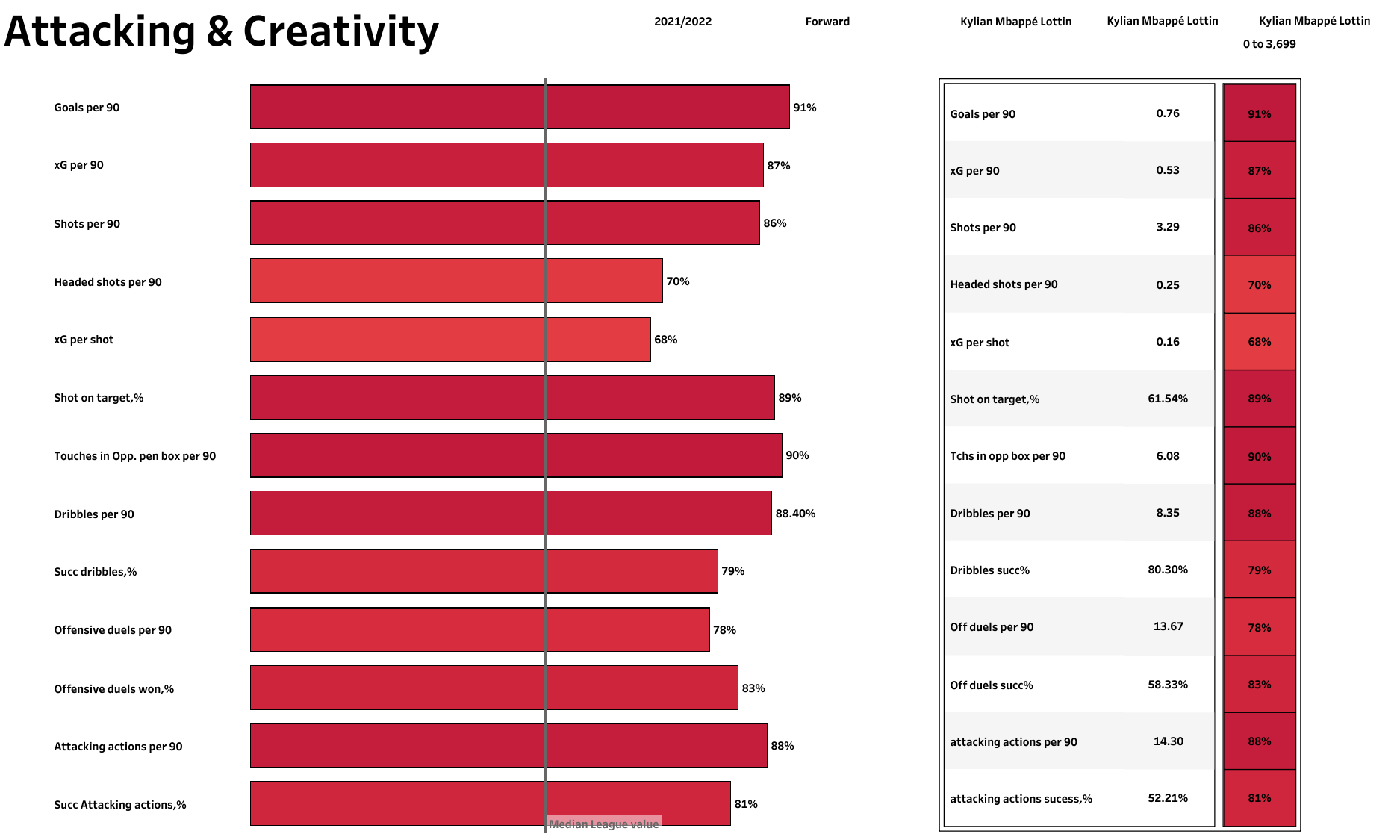 Kylian Mbappe has netted six goals in eight games in the UEFA Champions League for PSG as they were knocked out in the Round-of-16 by Real Madrid. The Frenchman has scored at a rate of 0.76 goals per 90 or a goal every 112 minutes, putting him in the top 9%. At 0.53 xG per 90, he ranks in the upper quintile of this category. With 4/5th of his dribbles being successful, he will give opposition defenders nightmares. 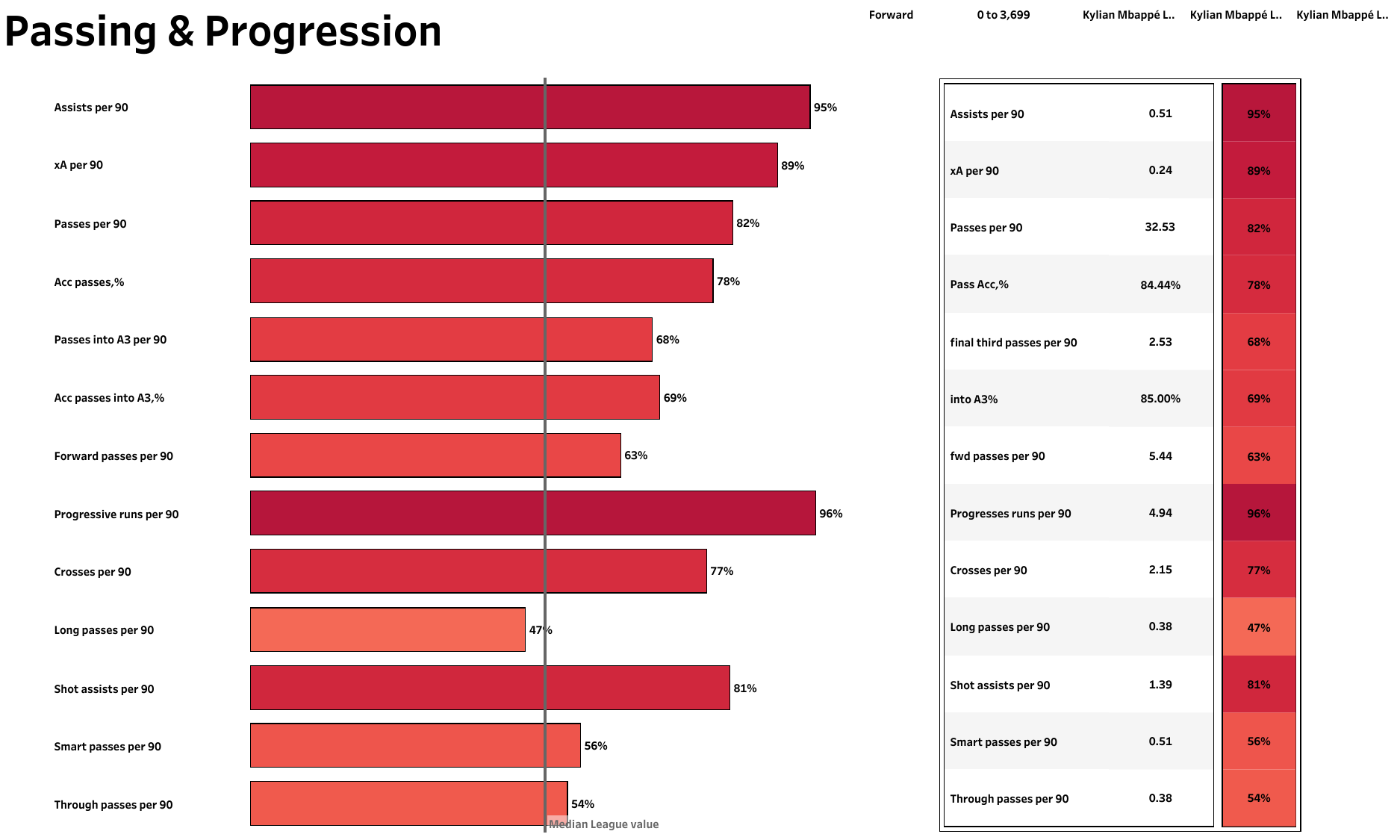 Mbappe has not only scored goals but also provided them. He has four assists to his name, which means he has been involved in a goal every 67.1 minutes in the UEFA Champions League. The Frenchman has provided assists at twice the expected rate, with 0.51 assists per 90 against an xA of 0.24 per 90. He has also made nearly five progressive runs per game in the UCL. 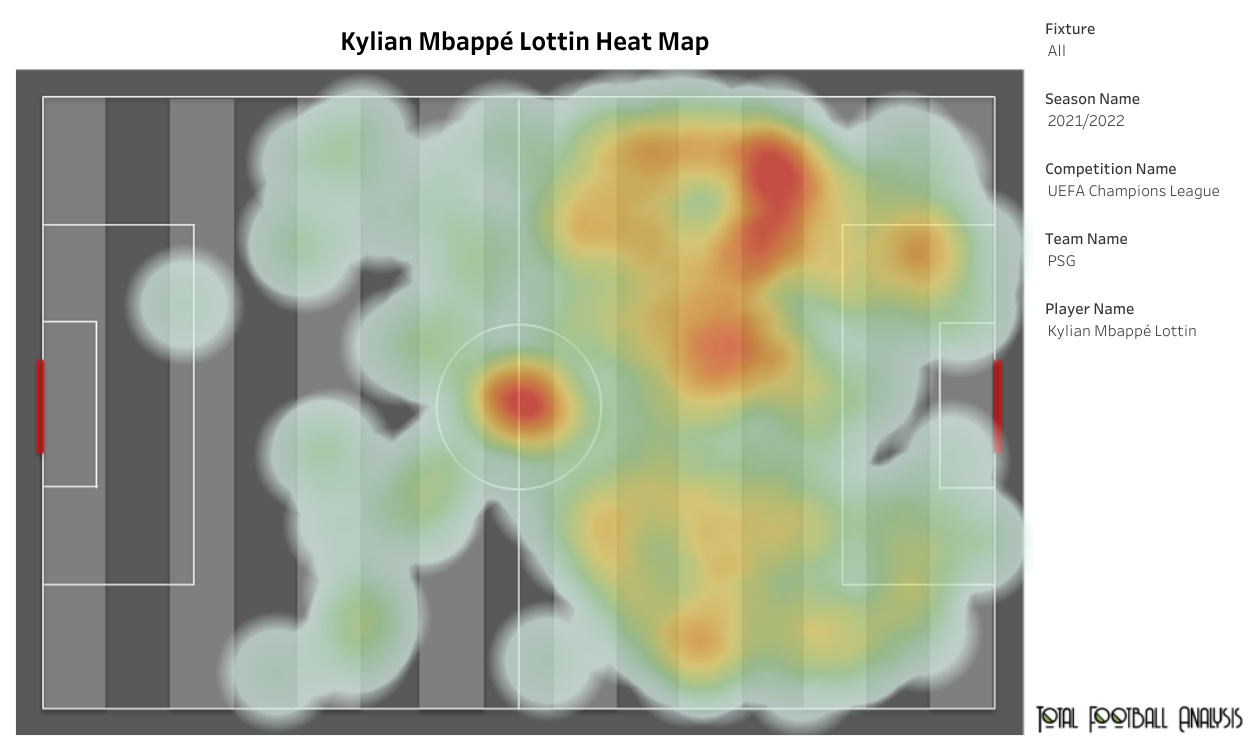 The heat map above shows that Mbappe has operated from the left wing for most of the time. But given his ability to play across the frontline, Vinicius Junior’s development this season on the left flank, and Karim Benzema not showing any signs of slowing down despite being 34, Mbappe will naturally play on the right flank, which is where he played for France in their 2018 FIFA World Cup win. The Frenchman has also spent a lot of time in the centre circle, but this is exclusively for receiving passes to launch counterattacks with his pace and dribbling. 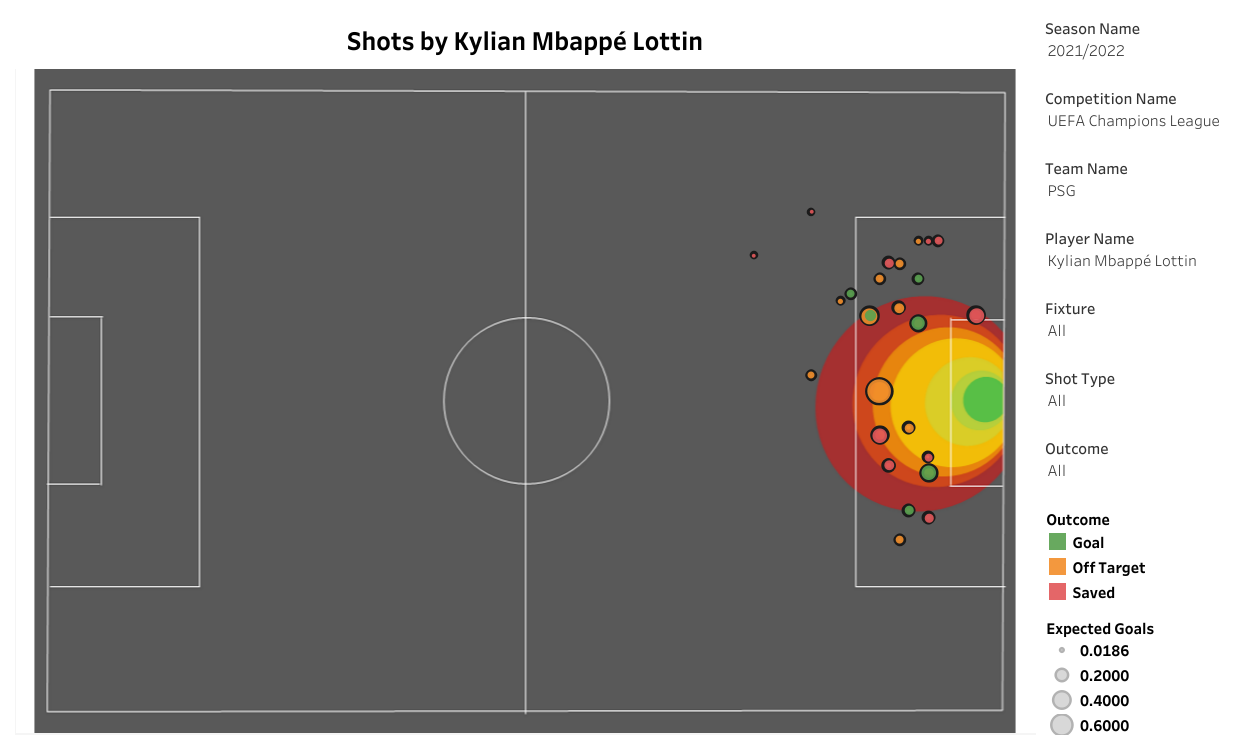 Seen above is the shot map of Kylian Mbappe in this season’s UEFA Champions League for PSG. All but one of his goals have come from inside the box. The 23-year-old has taken 26 shots and netted six goals, which means he has needed 4.3 shots to score a goal. 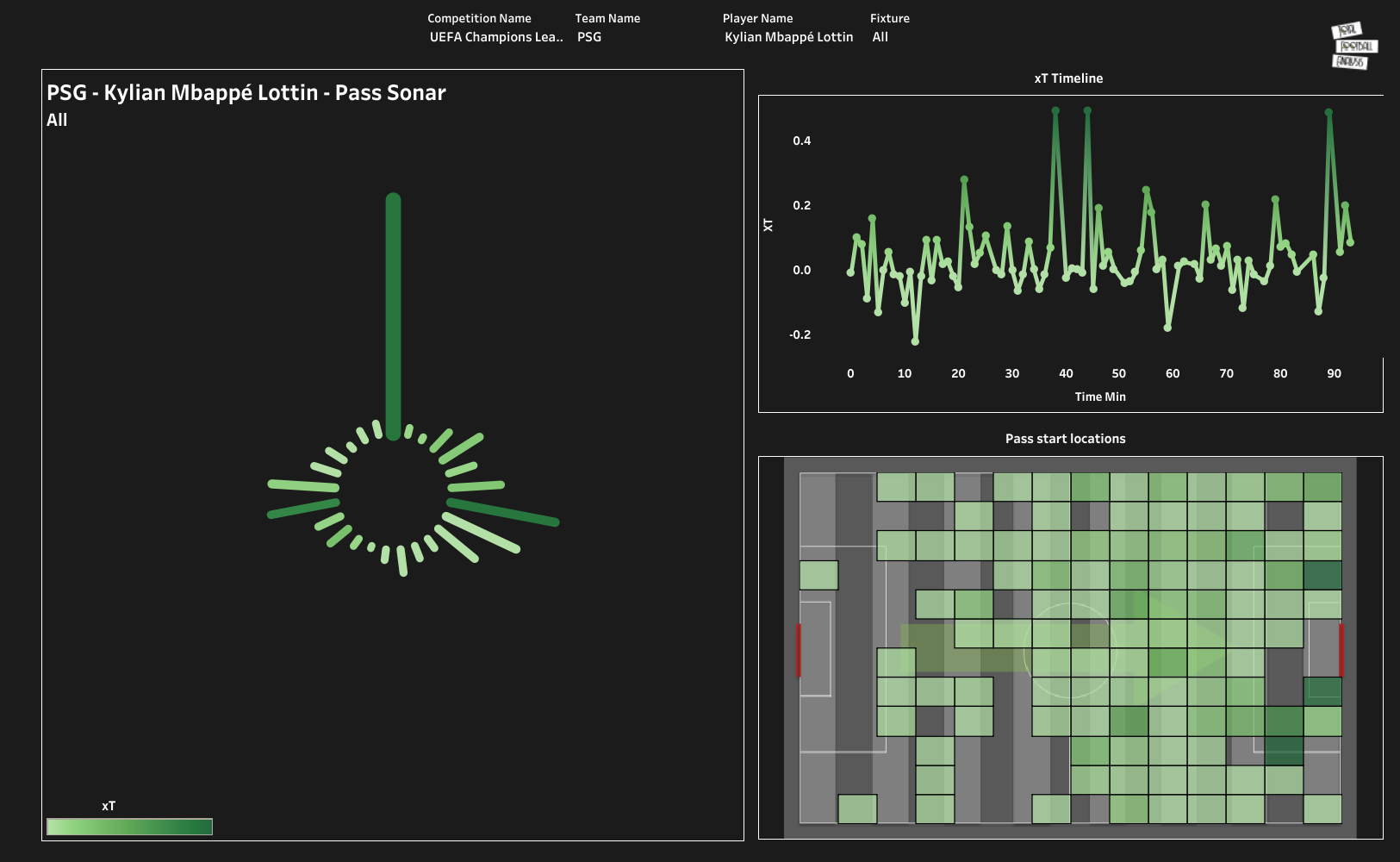 Mbappe primarily relies on his dribbling to produce threats, despite his four assists in the UCL. His strongest threat zones have come from inside the opposition’s penalty box but not elsewhere in the final third. In his recent Champions League campaign, his xT scores have not exceeded 0.5.

Mbappe’s signing will send a statement and warning to the rest of Europe. With Mbappe on the right, Benzema through the middle and Vinicius on the left up front, opposition defenders will have to watch out for Los Blancos’ potent attacking threat next season in both LaLiga and the UEFA Champions League.