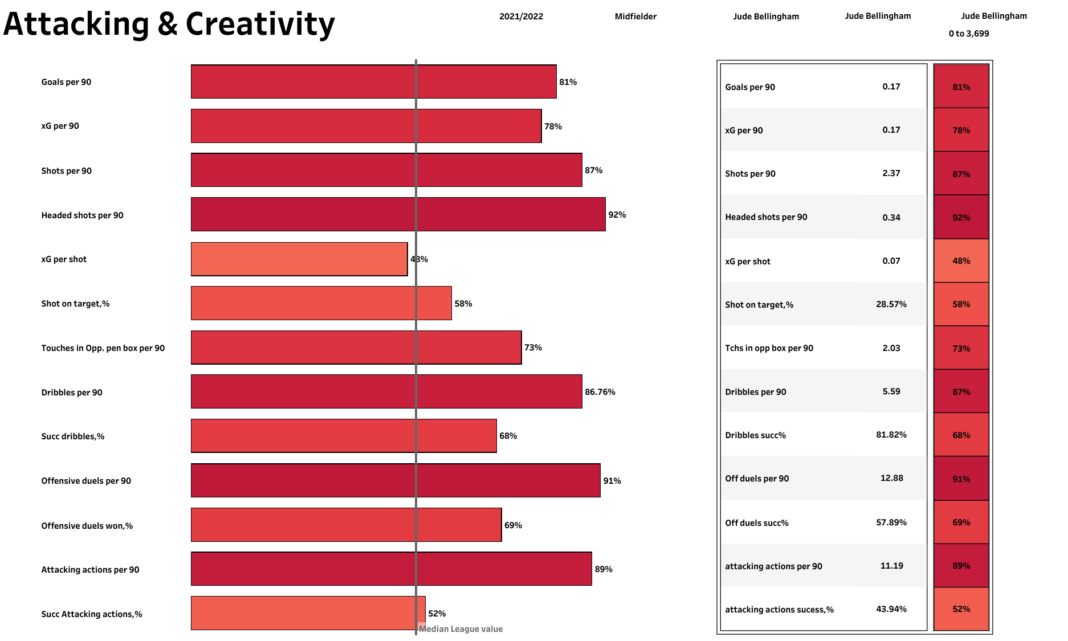 Real Madrid had a highly successful season last time, winning their 35th LaLiga title and also claiming their 14th European Cup/Champions League crown. Karim Benzema may have aged like fine wine and Vinicius Junior’s productivity may have skyrocketed, but the midfield department also deserves credit. The fabled trio of Casemiro, Kroos and Modric were once again highly influential for Los Blancos, but they have a combined age of 98 and an average age of 32.67. Real Madrid will need to bring in fresh legs in the midfield within the next one or two years. As per several reports in the media, Los Blancos are planning to bid for Borussia Dortmund’s teenage sensation, Jude Bellingham, in 2023. 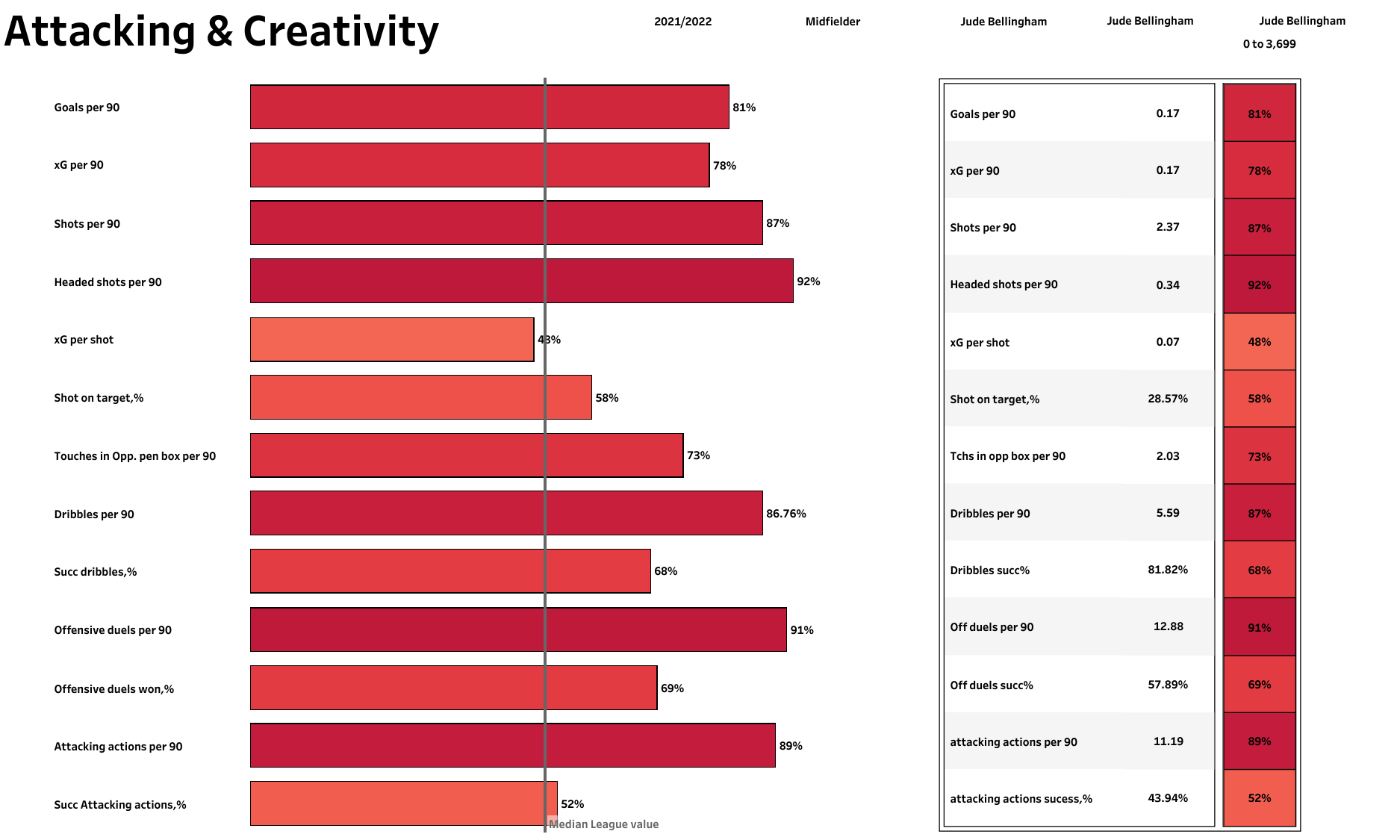 Bellingham featured in all the six games for Borussia Dortmund in the UEFA Champions League as they were knocked out in the group stages. He was on the pitch for 500 minutes during which he scored once and assisted thrice. He fired off 2.37 shots per 90, of which 28.57% hit the target. The Englishman was placed in the top 8% among midfielders for headed shots per 90. He attempted 5.59 dribbles per 90 at a success rate of 81.82%. Bellingham involved himself in just under 13 offensive duels per 90 and slightly above 11 attacking actions per 90.

Bellingham’s three assists meant that he massively outperformed his xA. With 0.51 assists per 90, he was put in the top 3% among midfielders. He participated fairly frequently in build-up play, attempting over 44 passes per 90, though his pass accuracy of 84.73% ranked him only just above the median value. Bellingham was not afraid to take risks with ball progression either as he registered over six balls into the final third per 90 at an accuracy a shade below 81%. Over 2.5 progressive runs per 90 were made by the teenager for Die Schwarzgelben. The Englishman also ranked in the 93rd percentile for smart passes per 90, with 2.2 to his name.

Bellingham took control of the midfield area for Borussia Dortmund, as given in the above heatmap. He attempted 14 shots for the team in the competition, of which four of them tested the opposition keepers. Off the ball, he worked his socks off. The Englishman attempted 23.4 pressures per 90, 3.93 tackles and interceptions per 90 and 2.68 blocks per 90. 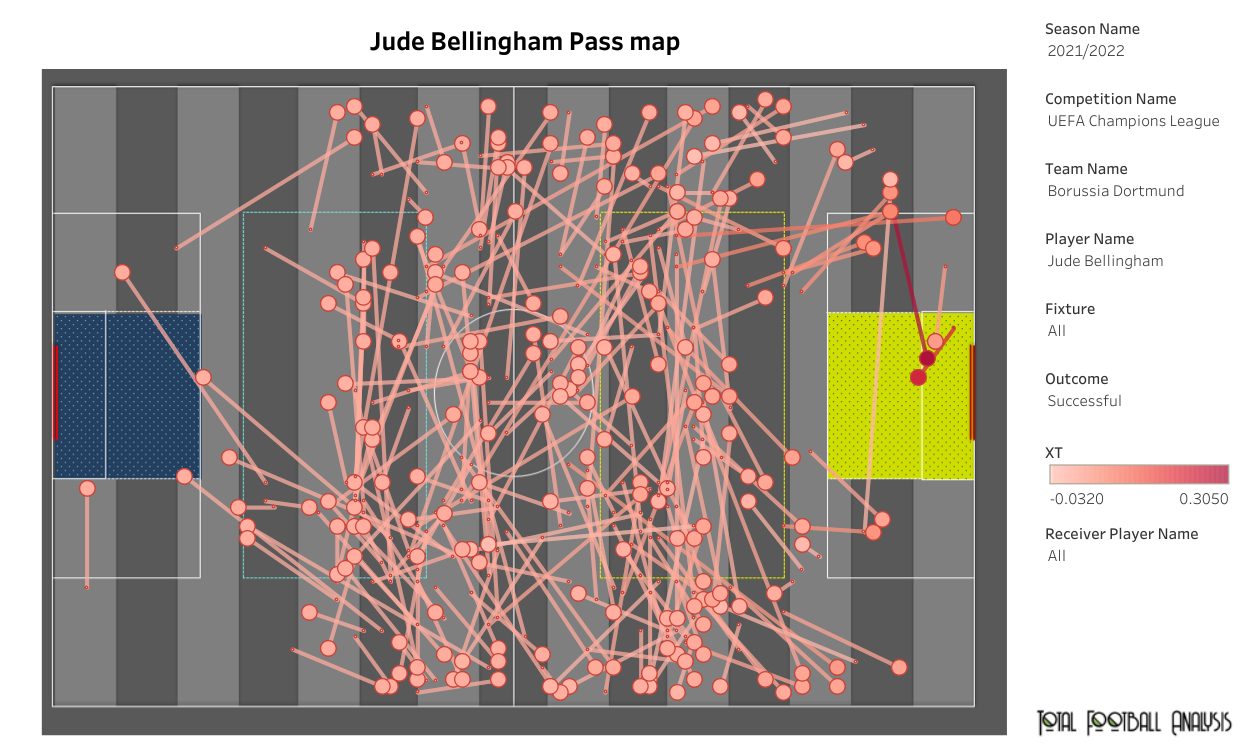 As shown above, Bellingham kept the ball ticking for Dortmund and was a metronome in the centre of the park. He completed 3.93 progressive passes per 90, 4.64 balls into the attacking third per 90, 6.96 progressive carries per 90 and 1.07 carries into the penalty area per 90.

Jude Bellingham established himself at Borussia Dortmund quickly since his move from Birmingham City in July 2020. However, at least one more season of development and game-time at the Signal Iduna Park will do wonders for the Englishman’s overall level. With the arrival of Aurélien Tchouaméni, Bellingham may not even be a necessity for Real Madrid.