Well, this was an obvious one. Alaba and Militao have formed one of the best centre-back partnerships in the Champions League in a short time. They work really well together and have put up some brilliant performances. They have such good chemistry and there may be centre-backs that are individually better than them, but at the moment, the way they work together has made this pairing a very formidable one. The strengths of one player are heightened by the other, and the weaknesses of one are nullified by the other.

For example, Militao is a good ball-playing centre-back. He’s not the best with the ball, but he can get the job done. Alaba is fantastic with the ball, and he helps Real Madrid, as well as Militao, through the opposition press. The Austrian is also an incredible passer, which supports Militao because while the Brazilian can compete in that area, Alaba’s attacking instincts give him the upper hand. 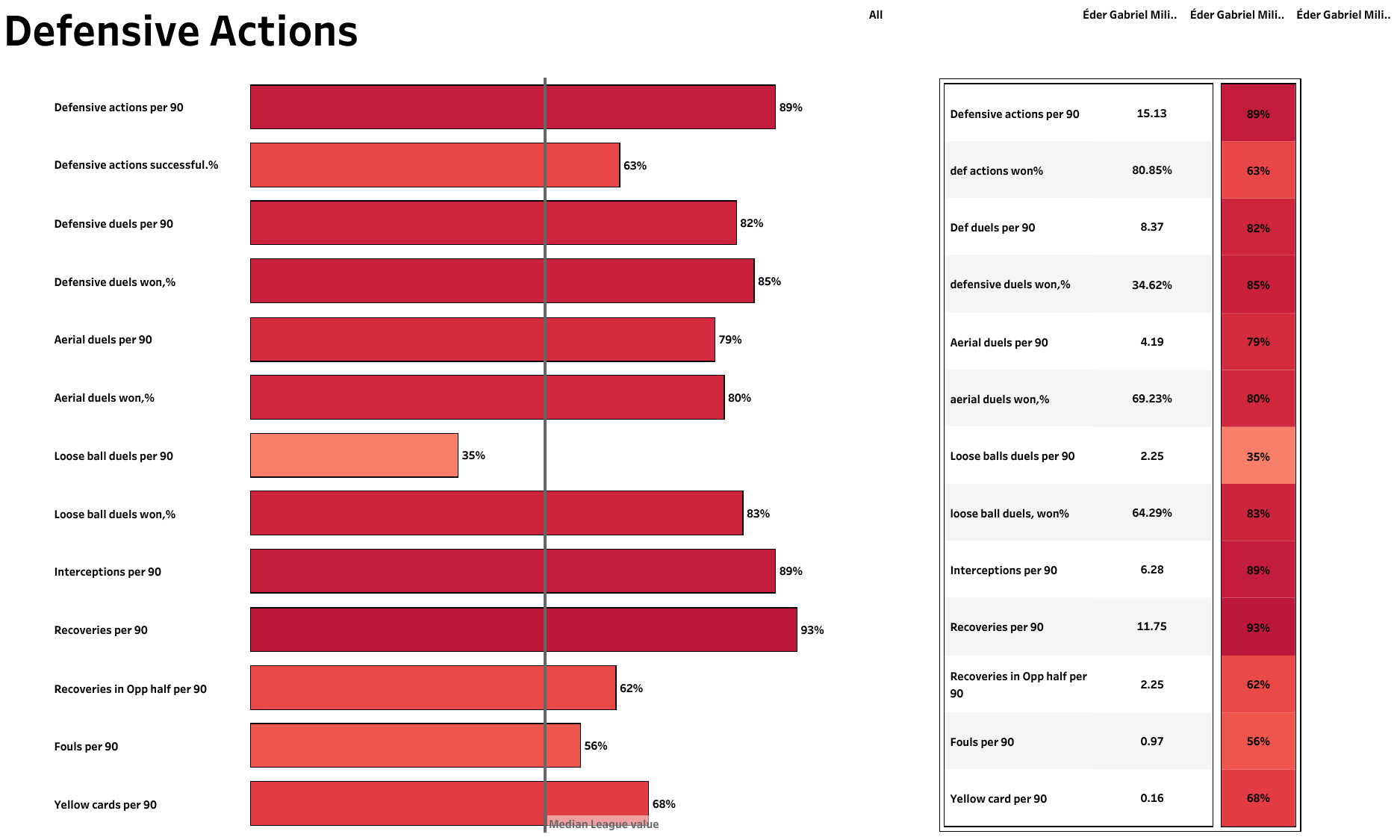 The above visual shows us the defensive metrics for Militao so far in the Champions League. He has featured in all six of Real Madrid’s games in the tournament. Eder Militao has been an important figure in their defense alongside David Alaba. The Brazilian has attempted 15.13 defensive actions per 90 minutes and has completed 81% of these actions. Militao has the highest success rate in winning loose ball duels and has won 64.29% of the total loose ball duels he has attempted. 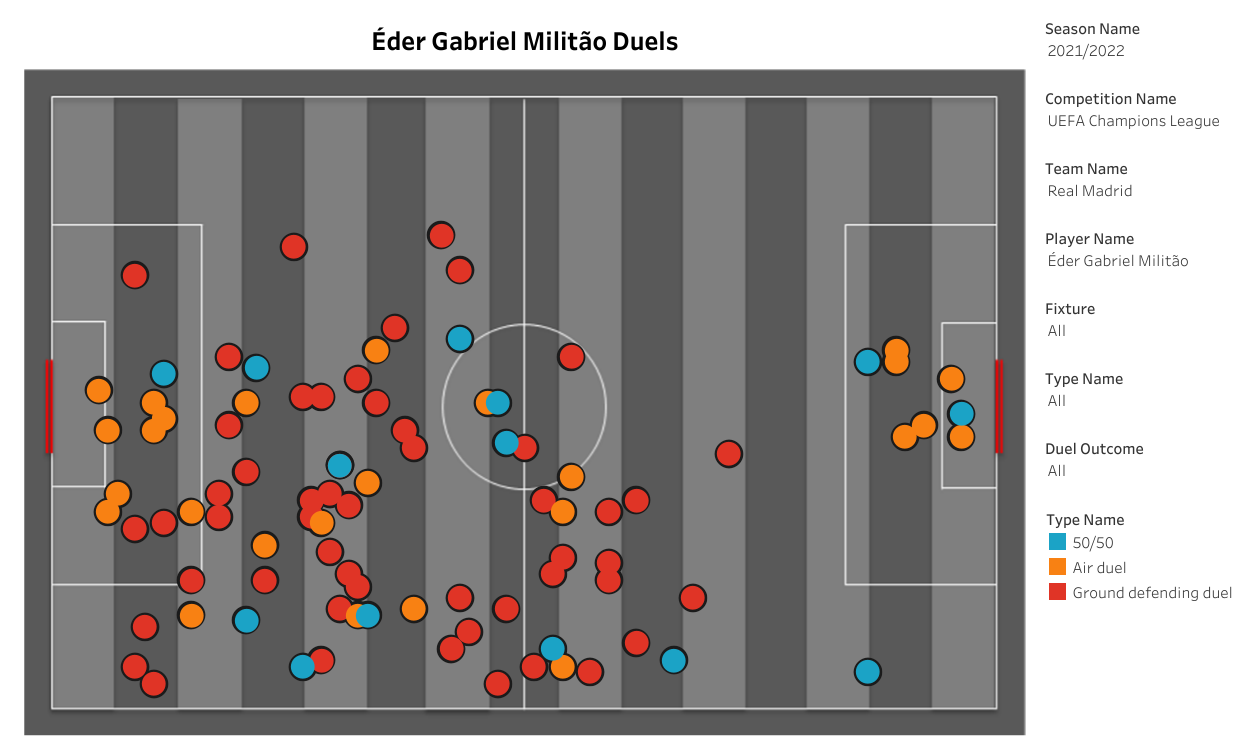 Alaba also helps Militao by not being as aggressive while defending. As we know, Militao takes well-timed gambles and someone needs to be there to cover for the open space that he leaves behind, and most of the time, it is Alaba who does that. In return, Militao helps him out by going for most of the aerial duels as Alaba is not the tallest centre-back you can find. The above visual shows how Militao has attempted plenty of aerial duels and has won most of them. These two work so well together, and the Los Blancos fans cannot wait to see their partnership improve as the season goes by.

Kroos is one of the best passers of all time and had the highest number of assists for any La Liga player in 2021. But this season, he’s been helped a lot by Alaba’s presence and press resistance.

These players know each other’s game and playing style from a while back because they played together for a few years at Bayern. It’s great to see how well they’re working together and both of them are solving Real Madrid’s issues in building out from the back against teams that press high. 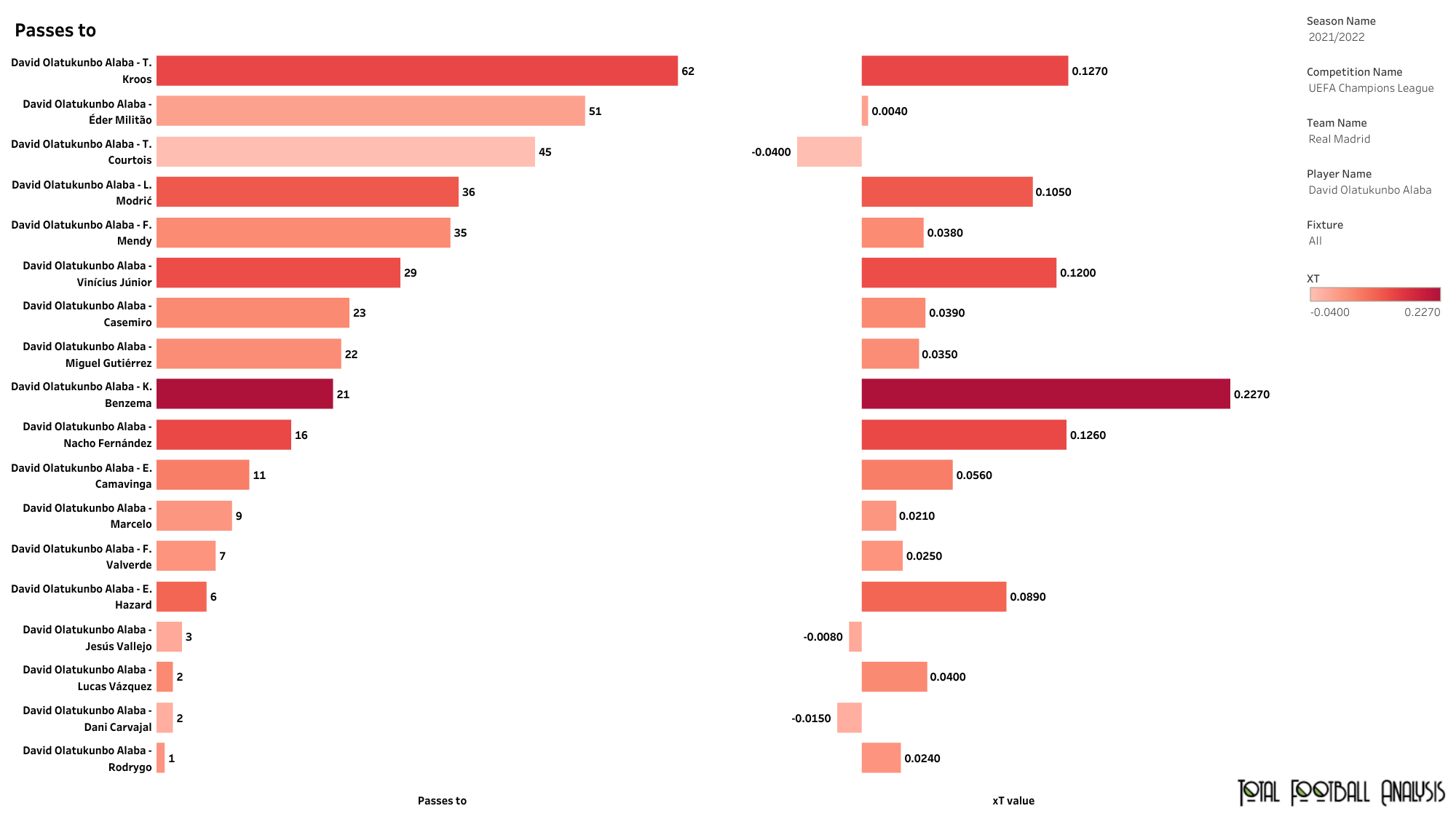 Kroos and Alaba are excellent ball carriers as they are very press resistant. They can deal with high pressure from the opponents and have the skill to find the right pass under pressure. We’ve seen them link up with each other to break through the press. Both of them know where the other one is going to be and it just works perfectly. Kroos knows that he can rely on Alaba’s passing range whenever he has to play it back to the defense, and he does that whenever required. Alaba, in turn, knows where Kroos is going to be whenever Real Madrid retrieve the ball from the opposition team, and he gets the ball to him in the hope of starting a successful counter-attack. Alaba has played a total of 62 passes towards Kroos and also has a very high xT from these passes.

These two players work on set-pieces together as well. It is either David Alaba or Toni Kroos who has been taking freekick, depending on which side it is on. Whenever Alaba becomes a makeshift left-back and pushes high up the field, Kroos is always there to find him on the overlap, which leads to a few attacking opportunities for Real Madrid.

Real Madrid have found themselves a fantastic player in David Alaba, and they are sure that he will continue to make more on-field partnerships with other players as well and can certainly help them improve their performances.

Under the microscope: Reliable Rodrygo – why the Brazilian should get more starts for Real Madrid

Lucas Vazquez: A former liberator now in the shadows

The importance of a CDM at Real Madrid: Tactical Analysis

Odegaard off: Why Real Madrid would be crazy to let him...

Under the microscope: Reliable Rodrygo – why the Brazilian should get more starts for Real Madrid