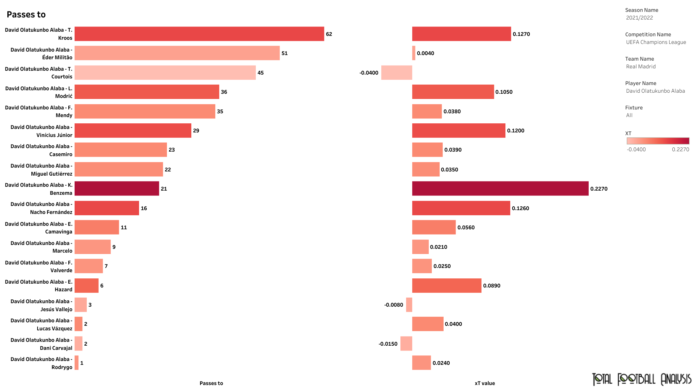 Real Madrid’s first of two signings this past summer – David Alaba, has been an absolute success. There is no other player that has had this big of an impact in the position that they play in, and there is no one who has fit in this seamlessly in the first six months of their transfer.

Alaba has been brilliant for the Los Blancos in the UEFA Champions League and has disproved all of his critics. Very few expected him to be able to hold his own at center-back, but he has, and the Austrian has absolutely exceeded all expectations.

In this case, it’s not only about what Alaba has done as a centre-back individually. Yes, he has played really well, but that’s not all he does. He’s a great team player, and we can see how his qualities help other teammates in every single game, even if it is not visible to the spectators.

Real Madrid were struggling a lot until Ferland Mendy returned from his long, injury-related absence in the game against Shakhtar Donetsk in the Champions League. And from that point on, Real Madrid have been in incredible form. Real Madrid haven’t lost a game since Mendy has returned to the squad.

Of course, Mendy has his limitations, just like every other player. He isn’t the greatest going forward, and he doesn’t perform as well under pressure as he could. In both of these situations, Alaba has helped the Frenchman. When Mendy has the ball and is being pressed by his opponents, Alaba will make himself available as an option to pass to, then use his press resistance to go past any defenders pressured on him. The above visual shows how Mendy has played several passes behind towards Alaba and has been able to keep possession of the ball.

Sometimes, to hide his shortcomings as an attacking full-back, Mendy would stay back and let Alaba become a makeshift left-back, which helps both players. It’s fantastic to see these two guys working along so well. Since Alaba has played as left-back for several years in his career, he is helping Mendy with all the experience he has gained to become a much better full-back.

Jose Mourinho and Real Madrid: The rumours that refuse to go...

‘The club encouraged me’- Why time may be up for this...