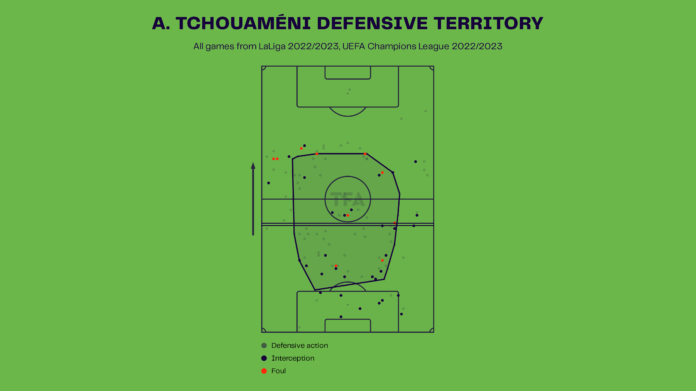 Aurelien Tchouameni was Real Madrid’s marquee signing in the summer. The club paid €80 million for the 22-year-old French midfielder. The deal could go up to €100 million due to add-ons. After winning the LaLiga and the UEFA Champions League titles in the 2021/22 season, Real Madrid decided to strengthen only a few areas in their squad. The midfield was a priority for the Spanish champions as some of their midfield pros are nearing the end of their careers. Aurelien Tchouameni was chased by a top European club in the summer. He is a top talent in French football and left AS Monaco to join one of the biggest clubs in world football.

Casemiro’s exit from the club left Ancelotti with only one designated defensive midfielder in the team. The manager gave the opportunity to his new signing and, since then, Tchouameni has cemented his place in the team. Aurelien Tchouameni is becoming a fan favourite and is also getting praise from some of his senior pros. Let us look at some of the stats of the youngster that show how Tchouameni is becoming a perfect replacement for their former Brazilian hero. 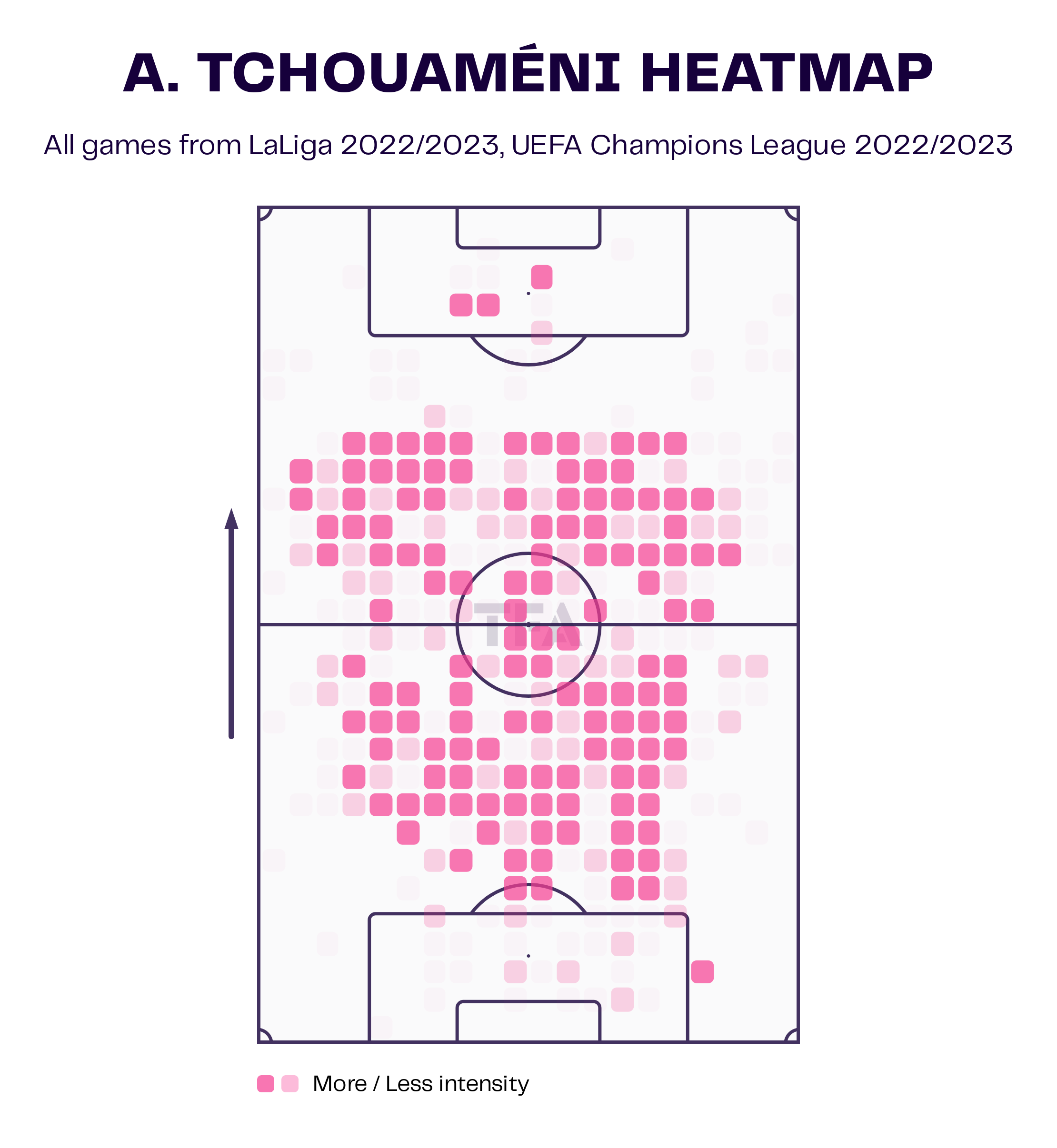 Aurelien Tchouameni made his debut against Almeria in LaLiga. He spent 62 minutes on the pitch. Tchouameni has played seven games for the club since the start of the league season, and two of those appearances came in the UEFA Champions League. The 22-year-old has shown some creativity and already has two assists to his name. In the last match against Atletico Madrid, Tchouameni provided an assist for Rodrigo to score the opening goal of the game. His other assist came in the 3-1 victory over Espanyol. Despite playing as a defensive midfielder, he has taken some advanced positions inside the opposition half. Tchouameni remains on the edge of the final third during attacking plays, according to the heatmap. 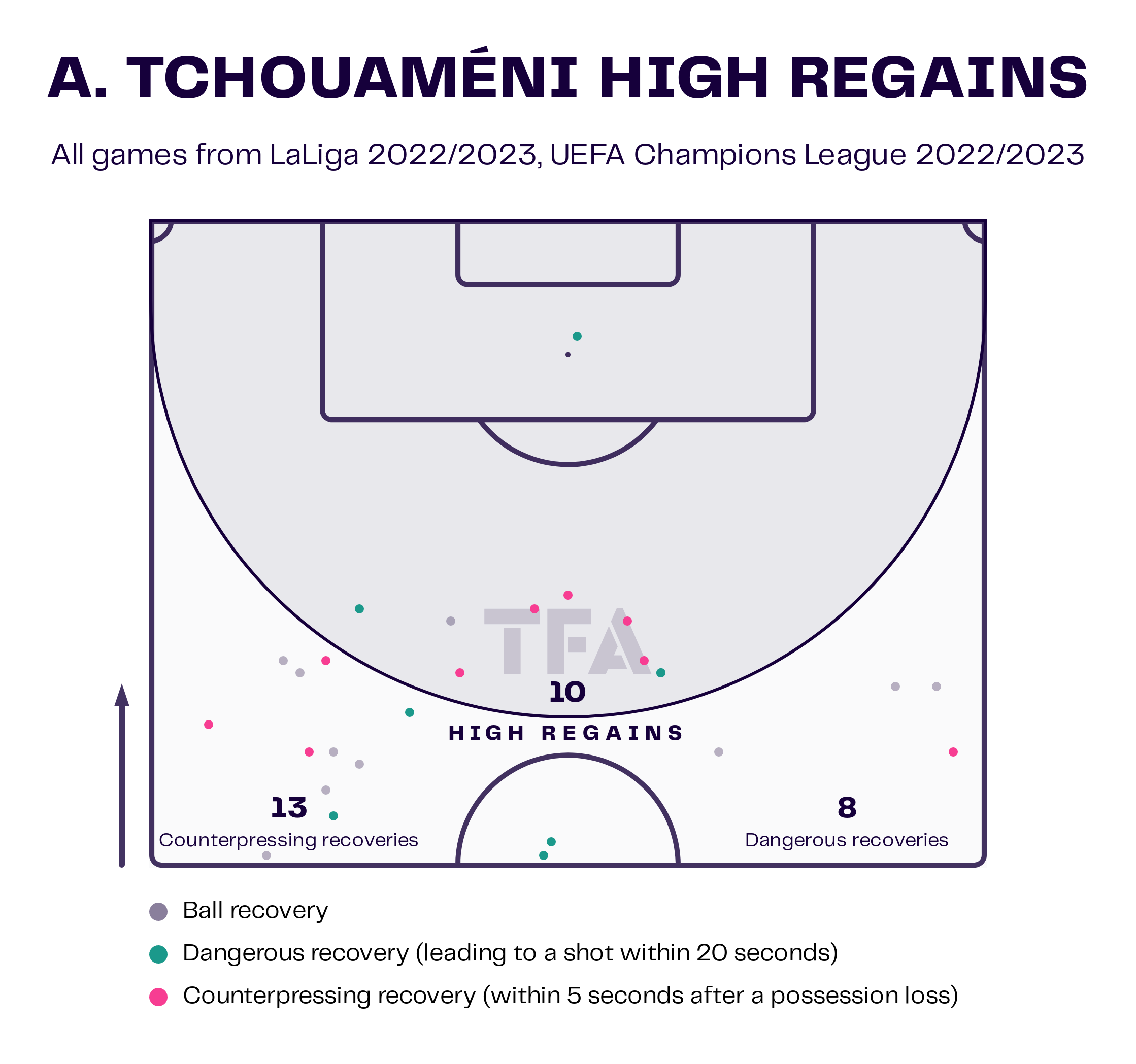 The defensive midfielder’s ability to recover the ball high up on the pitch has helped his team in the attack. Overall, Tchouameni has made 78 recoveries, and 30 were made inside the opposition’s half. Of these 30 recoveries, 13 were counter-pressing recoveries and eight were dangerous recoveries. Aurelien Tchouameni made 66 high regains in 46 matches last season. This was one of the reasons why Real Madrid paid a heavy price for the youngster. He has already made ten regains in the final third this season, one of which was inside the opposing penalty box. Three of these recoveries led to a shot within the next 20 seconds. 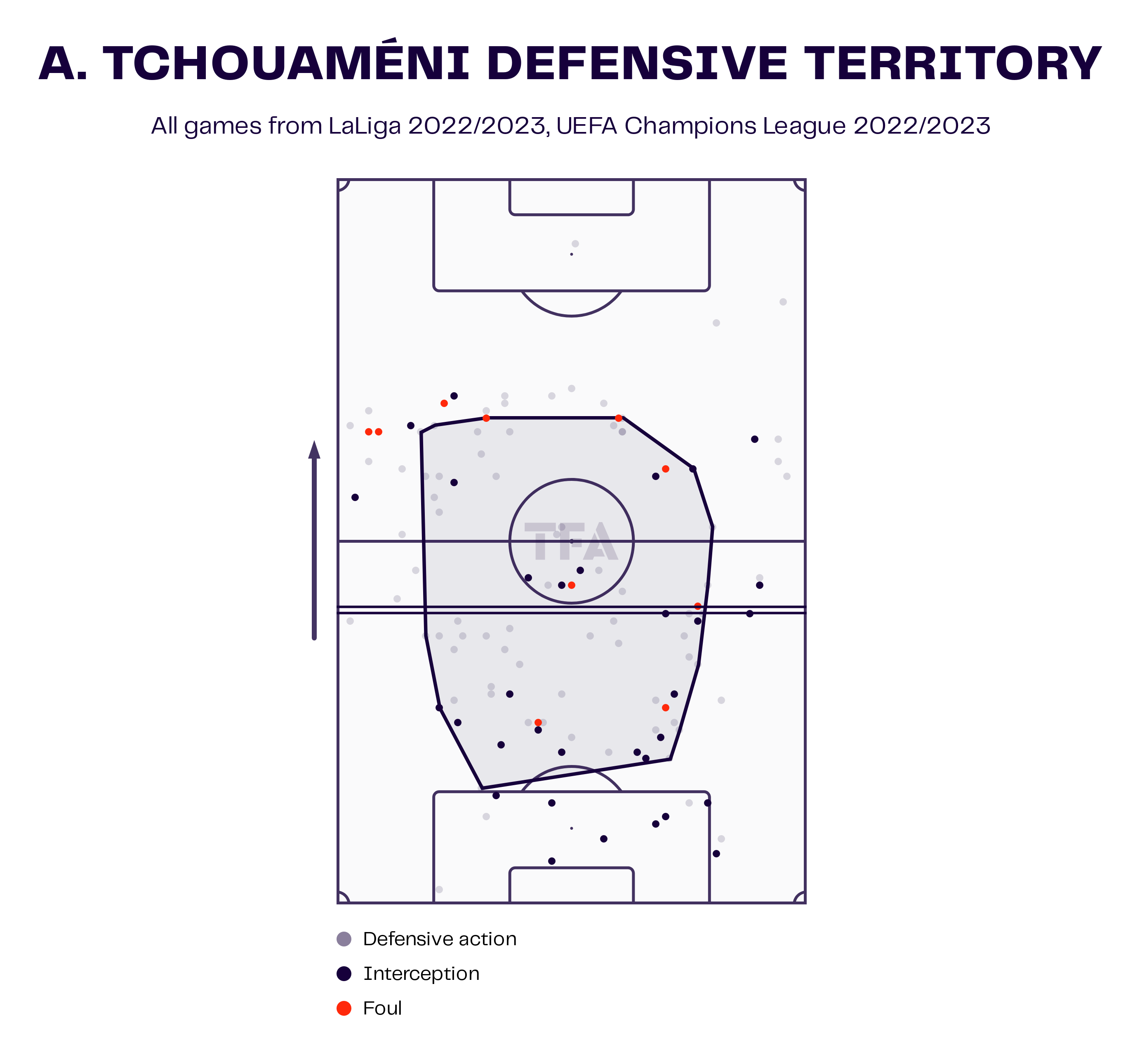 The youngster has covered a lot of ground on the pitch. Tchouameni’s defensive territory shows that he has been everywhere on the pitch to win the ball back for his team. He has been clever in giving away the fouls, with most of them coming in the attacking half. 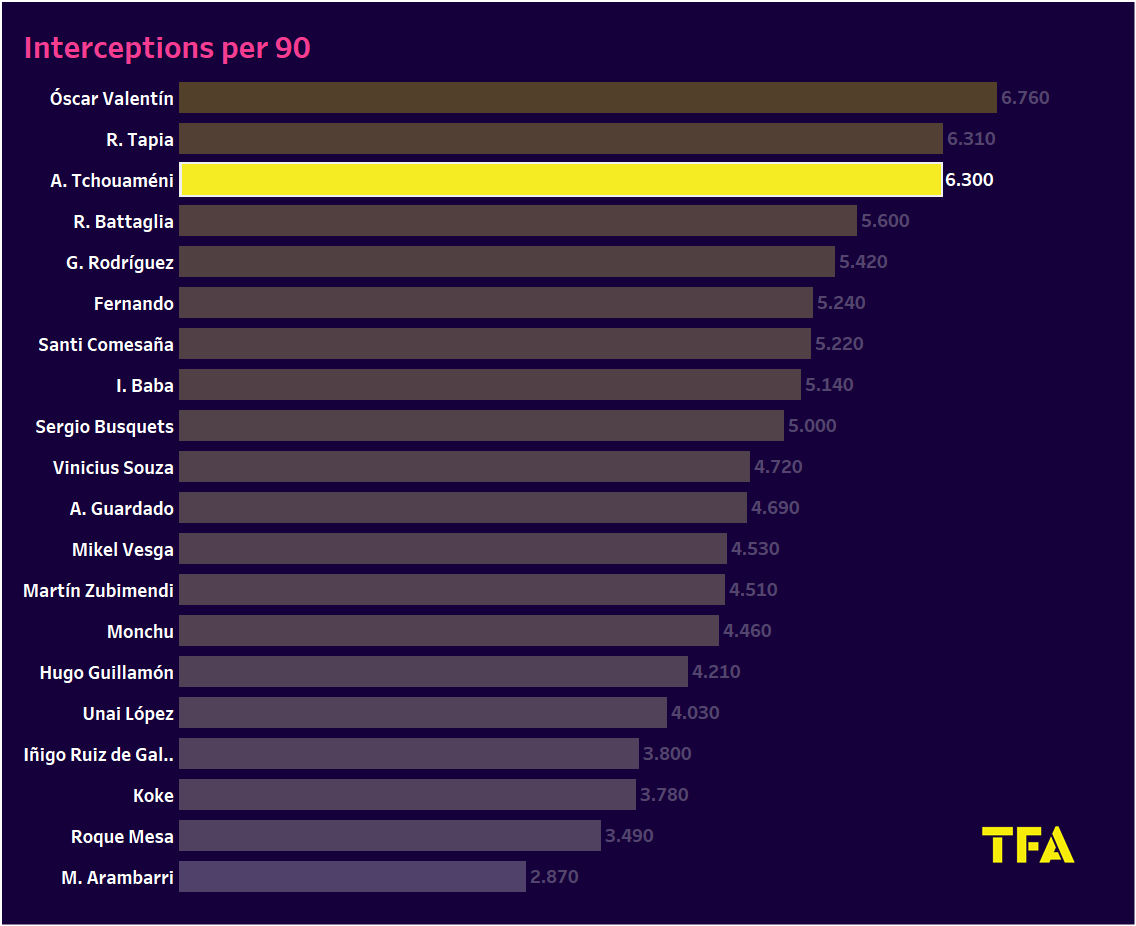 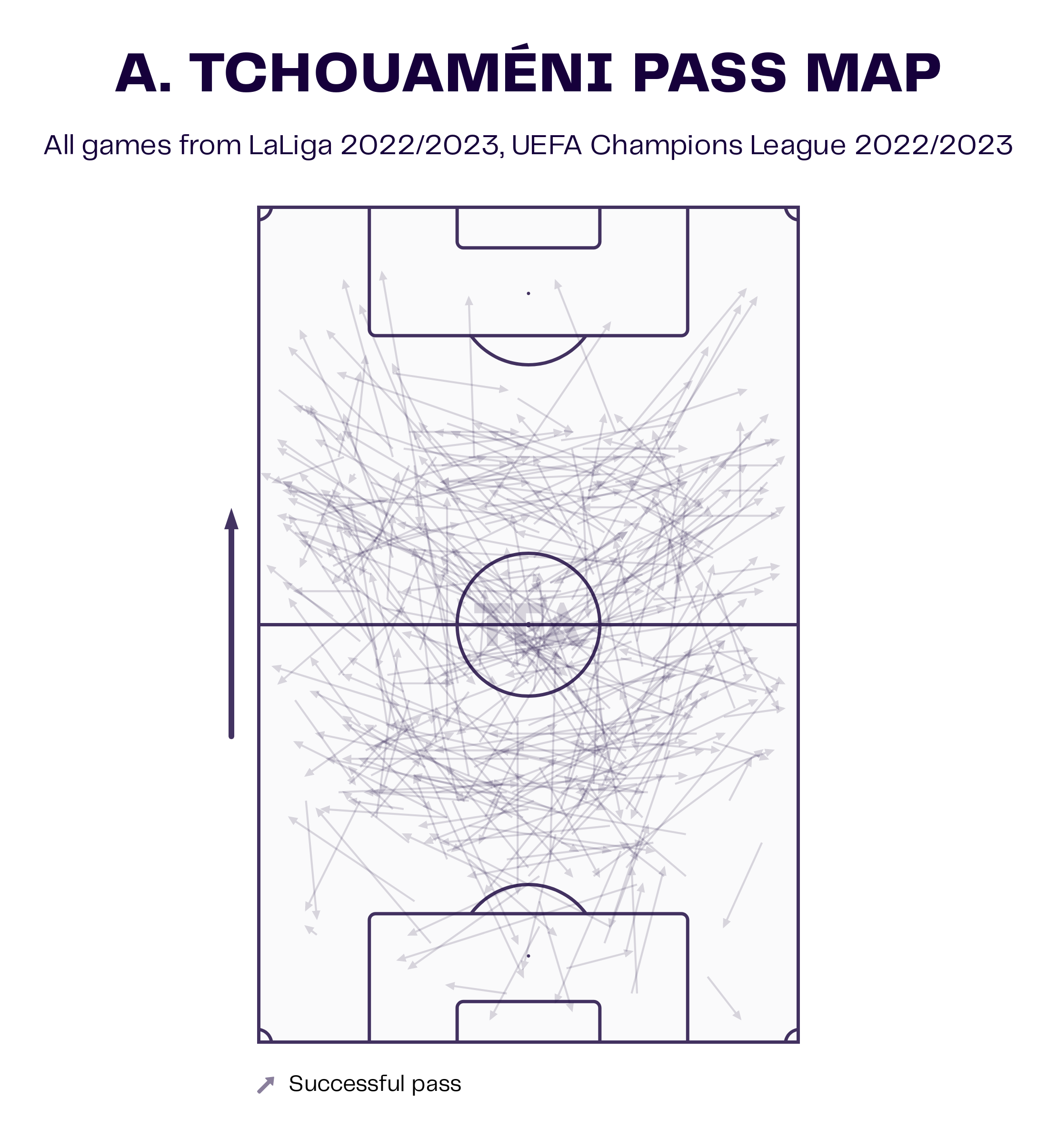 The 22-year-old averages 57.9 passes per 90 minutes, with a 91.8% accuracy rate. These include 7.7 passes to the final third and the accuracy rate was even higher at 92.3%. Tchouameni has distributed the ball well to all parts of the field and will look to add more assists to his name.

Aurelien Tchouameni has been the top performer for his side in the league. He is slowly making a name for himself and justifying his price tag. The 22-year-old is destined to achieve success with his new club.

Under the microscope: Karim Benzema – The Frenchman is ageing like...

Under the microscope: Can Fede Valverde become a midfield commander for...

What happens after the season ending injury to Marco Asensio ?

How Zinedine Zidane gave Real Madrid a 2016 flashback against Celta...